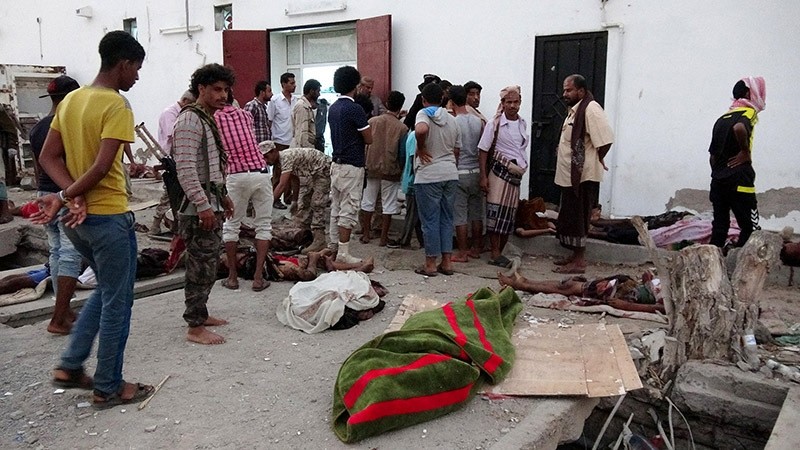 Soldiers and people gather by the bodies of soldiers killed by a suicide bomber at a base in the southern port city of Aden, Yemen on Dec. 10, 2016. (Reuters Photo)
by Compiled from Wire Services Dec 10, 2016 12:00 am

Yemeni officials said the death toll has risen to 45 after a suicide attack which targeted a military camp on Saturday in the southern city of Yemen.

Daesh claimed responsibility for the attack which killed at least 45 soldiers and wounded around 50.

The bomber detonated his explosives belt as hundreds of troops gathered to receive their monthly pay at the barracks in Al-Sawlaban near the city's international airport, a military source said.

"A martyr from the Daesh denotated his explosives belt in Al-Sawlaban military camp in Aden during a gathering of the Yemeni army," the Daesh-affiliated Amaq news outlet said.

Yemeni authorities have for months pressed a campaign against terrorist groups who remain active in the south and east of the war-torn country.

Daesh and Al-Qaeda have taken advantage of a conflict between the government and the Houthi rebels, who control the capital Sanaa, to bolster their presence across much of the south.

The two groups have carried out a spate of attacks in Aden, Yemen's second city and headquarters of the internationally recognized government whose forces retook the port from the Houthis last year.

The troops, Al-Qaeda, and Daesh are fighting Shiite Houthi rebels, who in 2014 seized Yemen's capital, Sanaa, and later swept much of northern Yemen. Their advances forced Hadi to flee the country and seek shelter in neighboring Saudi Arabia.

A Saudi-led coalition, mostly consisting of Gulf Arab states, subsequently intervened in Yemen, launching a punishing air campaign against the rebels and their allies.