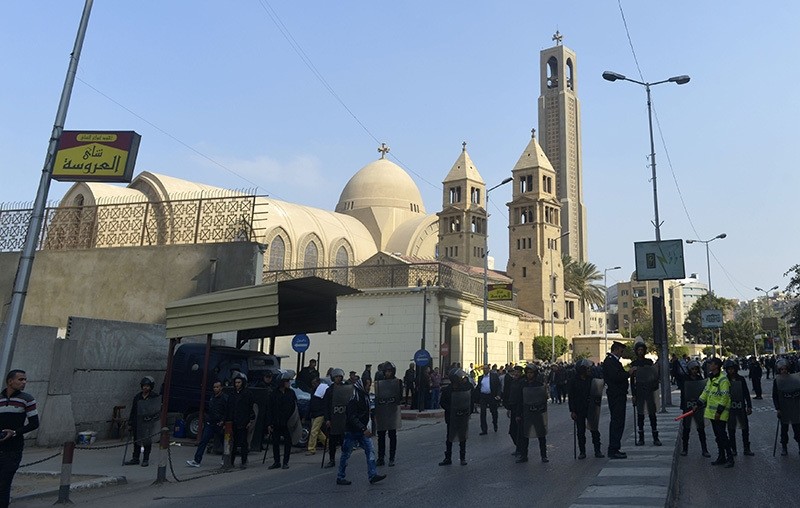 Egyptian security forces gather at the site of an explosion at the Saint Mark's Coptic Orthodox Cathedral on December 11, 2016 in the Abbasiya neighbourhood in the capital Cairo (AFP Photo)
by Compiled from Wire Services Dec 11, 2016 12:00 am
25 people were killed and 35 injured after an explosion near Cairo's main Coptic cathedral on Sunday, the Health Ministry reported.

Security forces rushed to the site of the blast in the Cairo district of Abassiya in the vicinity of the Coptic Orthodox Cathedral, the seat of Egypt's Coptic pope, and cordoned off the scene, the source added.

Egypt's official MENA news agency said an assailant lobbed a bomb into a chapel close to the outer wall of St Mark's Cathedral, seat of Egypt's Orthodox Christian church and home to the office of its spiritual leader, Pope Tawadros II, who is currently visiting Greece.

Witnesses said the explosion may have been caused by an explosive device planted inside the chapel. Conflicting accounts are common in the immediate aftermath of attacks.

However, a security official, speaking on condition of anonymity, said that the blast had been caused by an explosive device likely thrown by an unknown person inside the church.

State television showed security forces deployed in large numbers around the cathedral, which is the seat of Egypt's Coptic Orthodox pope.

There has been no immediate claim of responsibility for the attack.

There was no immediate claim of responsibility for Sunday's attack, which has drawn a flurry of condemnations by government and religious leaders as well as assertions of unity between Egypt's Muslim majority and Christians, who account for about 10 percent of the country's 92 million people.

An angry crowd of several hundred people gathered outside the cathedral, chanting anti-government slogans and calling for the sacking of the interior minister, who is in charge of security. Scuffles broke out with the police when the protesters tried to push through their barricades, but there were no immediate reports of arrests. Police in full riot gear later arrived at the scene.