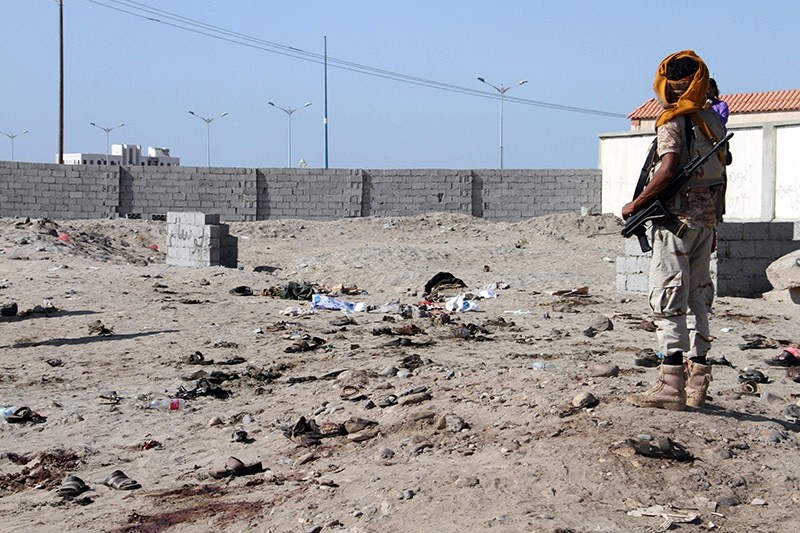 Yemenis gather at al-Sawlaba base in Aden's al-Arish district on December 18, 2016, after a suicide bomber targeted a crowd of soldiers. (AFP Photo)
by Compiled from Wire Services Dec 18, 2016 12:00 am

A suicide bomber killed at least 42 Yemeni soldiers on Sunday when he detonated his explosives at a gathering in the southern city of Aden, military officials and medics said.

The officials said the soldiers were queuing to collect salaries near a military base in the Khor Maksar district when the attacker blew himself up. Dozens of other troops were wounded, they said.

The attacker immersed himself among the soldiers at Al-Sawlaba base, in Al-Arish district, a military official said.

The terrorist organization Daesh claimed responsibility of the attack, which comes eight days after a similar bombing in Aden claimed again by Daesh killed 48 soldiers and wounded 29 others.

Aden is the temporary capital of Yemen's internationally recognized government in exile in neighboring Saudi Arabia. The administration has struggled to establish its control in the city amid dozens of terrorist attacks against its forces.

The two militant groups have carried out a spate of attacks in Aden, Yemen's second city and headquarters of the internationally recognized government whose forces retook the port from the Houthis last year.

But al-Qaeda has distanced itself from the Dec. 10 attack, claiming that it tends to avoids "the shedding of any Muslim blood" while focusing on fighting the "Americans and their allies." In August, a Daesh militant rammed his explosives-laden car into an army recruiting center in Aden, killing 71 people in the deadliest jihadist attack on the city in over a year.

Yemeni authorities have for months pressed a campaign against militants who remain active in the south and east of the war-torn country. Daesh and al-Qaeda have taken advantage of a conflict between the government and Yemen's Houthi rebels, who control the capital Sanaa, to bolster their presence across much of the south.

Iran-backed Houthi rebels seized the Yemeni capital Sanaa in September 2014, forcing the internationally recognized government to flee the country. A Saudi-led, U.S.-backed coalition has been conducting an extensive air campaign against the Houthis since March 2015 that has pushed the rebels out of southern Yemen. The U.N. says the conflict has left more than 19,000 people dead and displaced at least 3 million. Saudi Arabia leads a coalition of Muslim countries, backed by the U.S., the U.K. and France, in the war in neighboring Yemen. The campaign, which is a campaign to restore the government ousted by the Iran-allied militia, is part of a larger assertive effort to prevent weapons from reaching Shiite Houthi rebels and their allies, who have overrun much of Yemen.