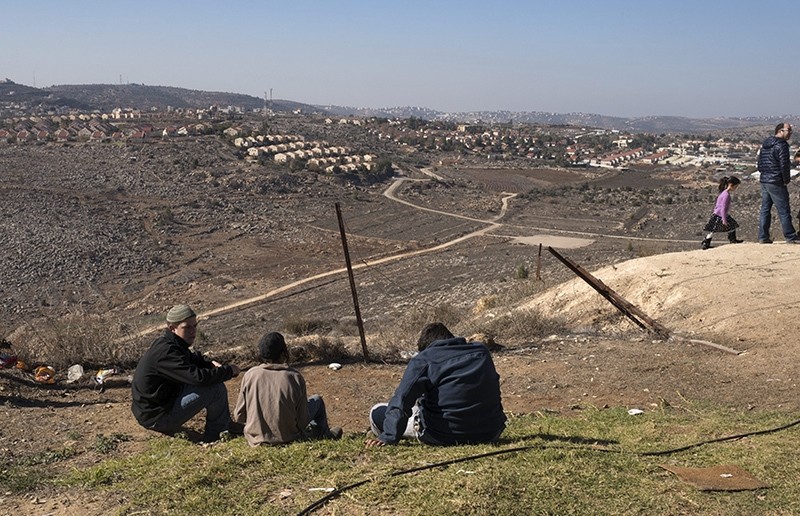 Jewish settlers on a overlook in the Jewish settlement called Amona -considered an 'illegal outpost settlement'- in the West Bank, 09 December 2016 (EPA Photo)
by Dec 26, 2016 12:00 am

"The language being used against the president of the U.S. is itself unprecedented, and it really should not be language that an ally uses with an ally, however angry someone is," Dan Kurtzer, who served as U.S. ambassador to Israel under former president George W Bush, told Israeli radio.

Netanyahu has accused outgoing U.S. President Barack Obama of pushing for the resolution behind the scenes. "We have no doubt that the Obama administration initiated it, stood behind it, coordinated on the wording and demanded that it be passed," he said Sunday night.

The UN Security Council on Friday adopted a resolution that condemns Israeli settlement building in the Palestinian Territories and called on Israel to halt it, with 14 votes in favour and one abstention by Washington.

Netanyahu has taken a slew of actions in response to what his office described as a "shameful" and "absurd" resolution.

He has cancelled a visit by his Ukrainian counterpart, asked the Foreign Ministry to re-evaluate relations with UN institutions and summoned the current U.S. ambassador to Israel.

The envoys of all the member states that had voted for the resolution were also summoned to the Foreign Ministry on Sunday, which was Christmas Day.

Local media also reported Sunday that Netanyahu had cancelled a planned meeting with Prime Minister Theresa May on the sidelines of next month's World Economic Forum in the Swiss resort of Davos.

The deputy British ambassador to Israel, Tony Kaye, who was one of the envoys summoned, told Army Radio on Monday that he was disappointed Netanyahu did not want to speak with May and that he hoped for a chance for conversation between the two at some point in the future.

There is speculation that Netanyahu is reaching out to the Trump administration and fears the current U.S. leadership is planning additional moves before January 20.

A meeting is planned for January 15 in Paris as part of a French peace initiative, as well as rumours of an address by U.S. State Secretary John Kerry on parameters for a two-state solution.

The Israeli government has repeatedly rejected efforts to set up the peace conference, while Palestinian leaders have welcomed the plan.