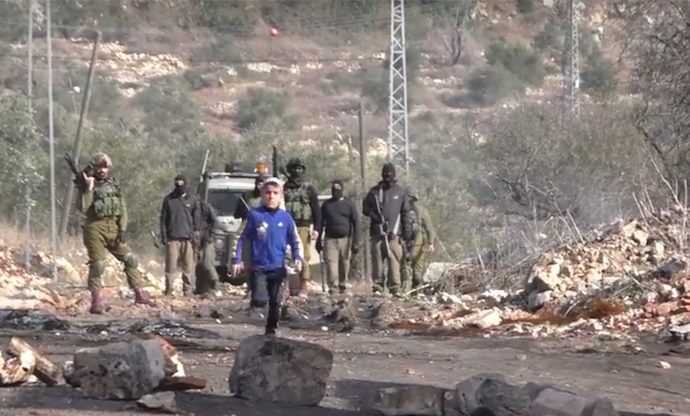 B'Tselem, an Israeli NGO shared a video on Twitter on Thursday. In the video, a 7 year old Palestinian boy is seen being detained by masked men, suspected to be Israeli soldiers.

The Israeli Information Center for Human Rights in the Occupied Territories shared the video with a story on it.

"Last Friday, 23 December 2016, the residents of Kafr Qadum held their weekly protest – held regularly since July 2011 – demanding that the road from their village to the city of Nablus be reopened. Since the military blocked the road off following expansion of the Kedumim settlement in 2003, village residents have had to take a bypass road, extending the 15-minute trip to Nablus to 40 minutes," the NGO said in the story.

"The weekly protests frequently involve clashes between the protestors, who throw stones at soldiers, and soldiers, who fire rubber-coated metal bullets and tear-gas canisters. Last Friday at midday, around 12:15, a group of protestors – residents of the village and Israeli activists – began marching toward a roadblock on the eastern side of the village. Testimonies collected by B'Tselem indicate that they reached a house on the eastern edge of the village, unaware of the presence of soldiers in the area. At that point, several children kept walking eastward, separately from the rest of the protestors."

The NGO also cited a village resident Muamen Murad Mahmoud Shteiwi, another 7 year old child. "One of the kids threw a stone towards a dirt mound that had a tin sheet on it. As soon as the stone hit the tin, men with masks came out from under it. Because of their masks and black gloves, at first I thought they were protestors. The rest of the kids who were around me ran away.

I realized they were Israeli soldiers, but I was so surprised and scared, I couldn't run. One of the masked soldiers knocked me over and grabbed me, and then more masked soldiers gathered around me. I was afraid. I cried and screamed because of how they looked. The soldiers detained me for about ten minutes. They shot at the protestors with me next to them," the boy was quoted as saying in the piece.

"A 7-year-old boy was held by masked soldiers while they fired at his friends. This is the occupation. This is what it looks like," B'TSelem concluded.