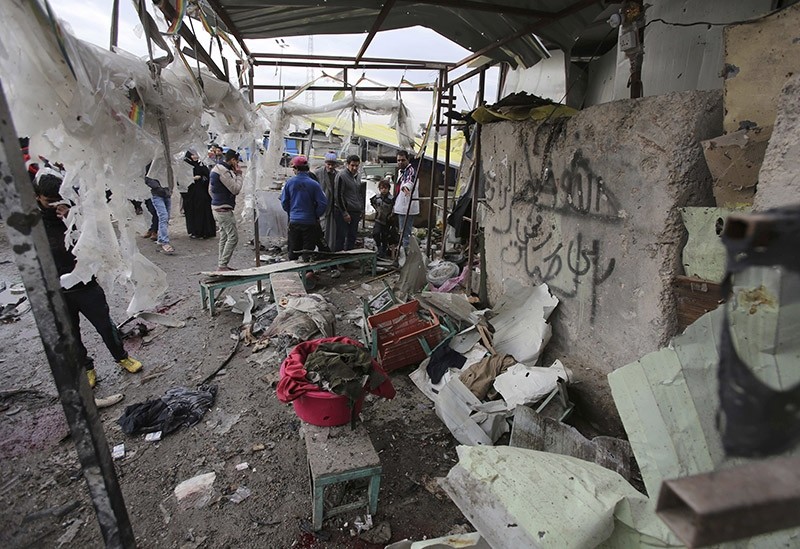 Citizens inspect the scene after a car bomb explosion at a crowded outdoor market in the Iraqi capital's eastern district of Sadr City, Iraq, Monday, Jan 2, 2017 (AP Photo)
by Associated Press
Jan 05, 2017 12:00 am

A car bomb tore through a Baghdad market on Thursday, killing at least nine people in what appeared to be the latest in a series of deadly attacks by the Daesh terrorist group.

The car was parked near an outdoor fruit and vegetable market in a mostly Shiite neighborhood. Seven civilians and two policemen were killed, while at least 15 other people were wounded, police and medical officials said, speaking on condition of anonymity because they were not authorized to brief reporters.

No one immediately claimed the attack, but it bore the hallmarks of Daesh, which has carried out a string of bombings in the Iraqi capital over the past week, killing nearly 100 people. The terrorists frequently target Iraq's security forces and civilians in Shiite neighborhoods.

Daesh has managed to carry out a series of attacks across Iraq while also putting up stiff resistance in the northern city of Mosul, where U.S.-backed Iraqi forces have been waging a massive offensive since mid-October.

Mosul, about 360 kilometers (225 miles) northwest of Baghdad, is Iraq's second largest city and the terrorists' last major urban bastion in the country. Iraqi forces have retaken around a quarter of the city since the offensive began.