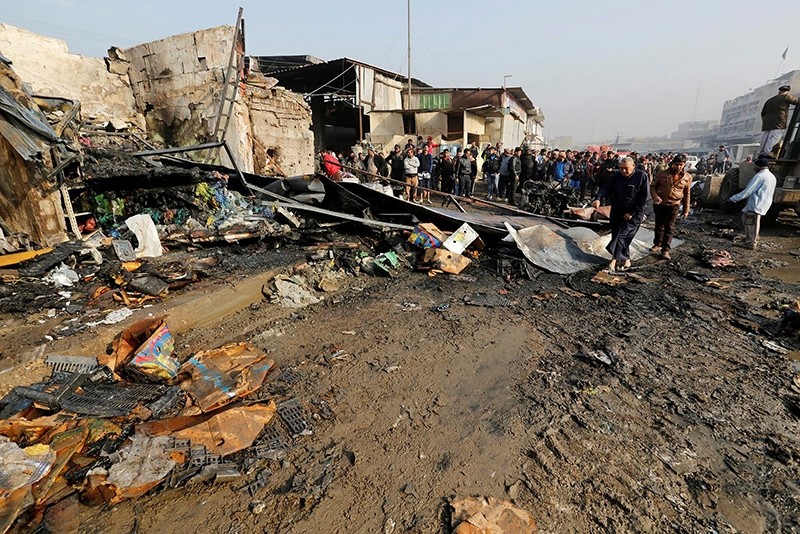 People gather at the site of a car bomb attack at a vegetable market in eastern Baghdad, Iraq January 8, 2017 (Reuters Photo)
by Compiled from Wire Services
Jan 08, 2017 12:00 am

A wave of attacks in and around Baghdad on Sunday killed at least 23 people, the latest in a series of assaults blamed on the Daesh terrorist group.

He said a member of the security forces spotted the bomber and opened fire but was unable to prevent the attack.

A policeman and two medical officials gave a higher toll, saying 16 people were killed in the attack and another 47 wounded. At a hospital where victims of the attack had been taken, a body exploded inside a morgue refrigerator.

The medics said it appeared to have been a second attacker who was killed by shrapnel from the first explosion.

Elsewhere in the city, a suicide bomber killed nine shoppers and wounded 16 others at a fruit and vegetable market in a mainly Shiite neighborhood of Jamila.

Three additional bombings in and around the capital killed seven people and wounded 24 others. Police and medical officials confirmed the casualty figures. All officials spoke on condition of anonymity as they were not authorized to release information.

Several have been claimed by Daesh, which is coming under increasing pressure from a U.S.-backed offensive in Mosul, its last major stronghold in Iraq.