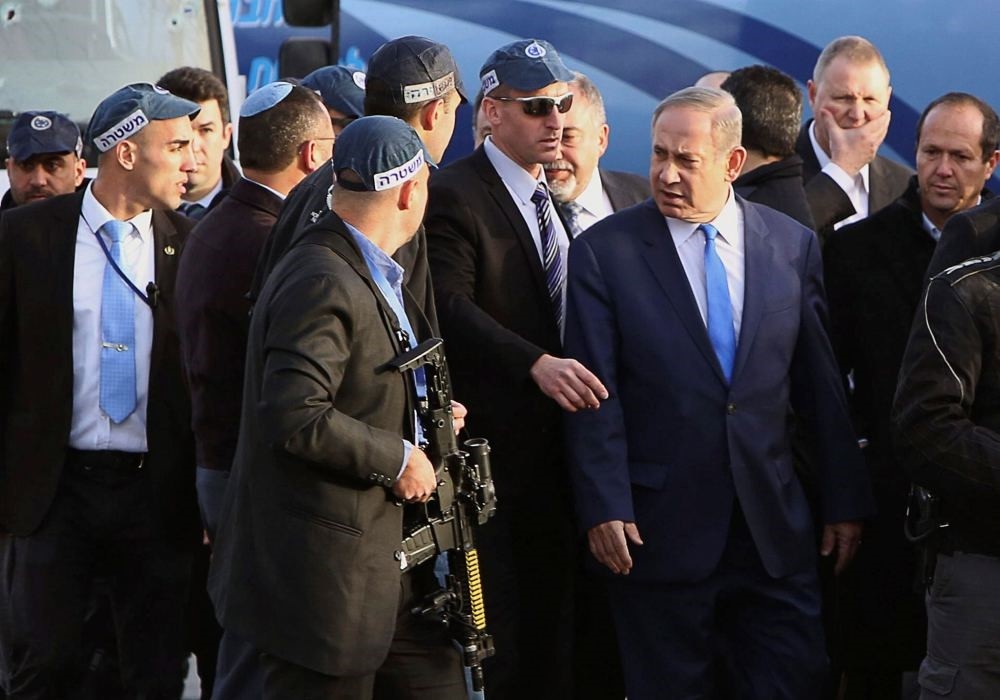 Israeli Prime Minister Benjamin Netanyahu visits the site where a Palestinian driver rammed a truck into a group of Israeli soldiers in Jerusalem on Jan. 8.
by Compiled from Wire Services
Jan 10, 2017 12:00 am

At a time of heightened tensions between Israelis and Palestinians, Israeli PM Netanyahu has linked Daesh to Sunday's truck-ramming attack in a popular Jerusalem tourist area while offering no evidence to support his claim

Following Sunday's truck-ramming attack in a popular Jerusalem tourist hotspot, Israeli Prime Minister Benjamin Netanyahu said there was strong evidence the attacker was a supporter of the Daesh terrorist group and suggested a link to previous vehicle attacks in Europe.

Neither Daesh nor any other group has claimed Sunday's attack.

"We know that there is a sequence of terror attacks. There definitely could be a connection between them, from France to Berlin and now Jerusalem," Netanyahu said. The attack came at a time of heightened tensions in Jerusalem, where the atmosphere among Israelis is charged following last week's manslaughter conviction of an Israeli soldier who fatally shot a wounded Palestinian attacker.

Israeli Prime Minister Netanyahu offered no evidence to support the claim. While Israel has arrested several Palestinians who allegedly traveled to Syria to join Daesh, the group is not known to have any serious presence in the Israeli or the Palestinian areas.

Israel has said that two gunmen who carried out a deadly attack in Tel Aviv last June were also inspired by the militant group.

The attacker, identified as 28-year-old Fadi Qunbar, came from the Palestinian neighborhood of Jabel Mukaber in east Jerusalem located near the attack site.

Netanyahu ordered a closure of the neighborhood. Israeli media said his security cabinet decided to destroy the attacker's home and withhold the release of his body.

Five members of his family were arrested for questioning, Israeli police said.

Tensions have lately increased after Netanyahu called for a pardon for a soldier convicted of manslaughter for shooting dead a wounded Palestinian as he lay on the ground.

Elor Azaria, whose military trial since May has deeply divided Israel, was convicted with right-wing politicians defending him despite top army brass condemning his actions. The case is considered as one of the most polarizing cases in Israel's history.

Following a series of statements by people close to U.S. President-elect Donald Trump that he is determined to move the U.S., tensions have been rising.

The U.S., like other countries, keeps its embassy in Tel Aviv, saying the fate of Jerusalem must be decided in negotiations between the Israelis and Palestinians.

Israel claims the entire city as its capital. The Palestinians seek east Jerusalem, captured by Israel in the 1967 Mideast war, as the capital of a future state. Israel has annexed the eastern sector, home to the Old City and sensitive holy sites, and says it will never allow the city to be divided. Last Friday, Palestinian President Mahmoud Abbas, invited Trump to visit the West Bank and urged him not to move the embassy. France and the European Union condemned the attack, as did the U.N. envoy for the Middle East peace process, Nickolay Mladenov. "It is reprehensible that some choose to glorify such acts which undermine the possibility of a peaceful future for both Palestinians and Israelis," he said. "There is nothing heroic in such actions."