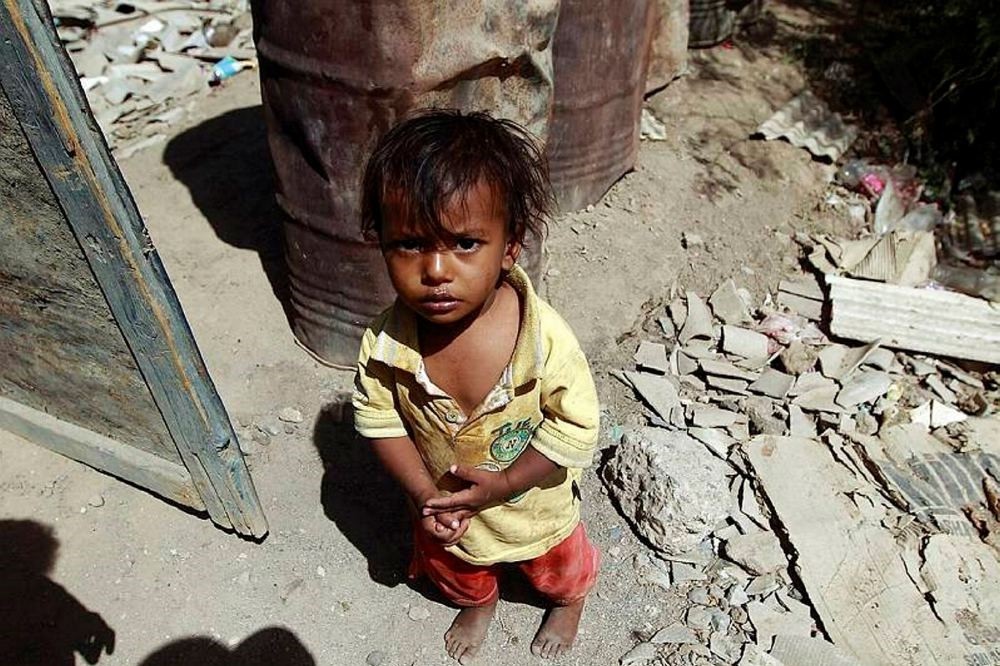 Yemeni children face life-threatening malnutrition, lack of access to health care and clean water due to the war.
by Daily Sabah with Wires Jan 13, 2017 12:00 am

More than 1,400 Yemeni children have died as malnutrition, cholera, lack of access to clean water and closing of educational facilities have turned the war-torn poorest Arab country into an uninhabitable place

Nearly 1,400 children have been killed, hundreds more injured and many schools closed by the war in Yemen, according to the UN children's fund. "Attacks on civilian areas continue to kill and injure scores of children in Yemen," said UNICEF's representative in Yemen, Meritxell Relano.

"Instead of learning, children are witnessing death, war and destruction," she added, warning that the actual casualty toll was likely to be much higher than the verified figures.

More than 7,300 people have been killed in Yemen since a Saudi-led coalition intervened against Iran-backed Houthi rebels in March 2015 in support of the government. Relano called on all parties in the conflict to protect children and stop attacks on schools.

The plea follows a coalition air strike near a school in Houthis-held northern Yemen on Tuesday that medics and a local official said killed five people, including two children. UNICEF said that it had confirmed the death of one child in the strike.

"Schools have to be zones of peace at all times, a sanctuary where children can learn, grow, play and be safe," Relano said. "Children should never risk their lives only to attend school."

She said that nearly 2,000 schools in Yemen can no longer be used because they have been damaged, destroyed or are used as shelters or for military purposes.

Iran-backed Houthi rebels seized the Yemeni capital Sanaa in September 2014, forcing the internationally recognized government to flee the country. Houthis have also been accused with preventing humanitarian aid. Ships carrying humanitarian aid to people in dire need of help have been seized over the last seven months by Iran-backed Houthis rebels, spokesperson for the Arab coalition Ahmed Asseri said to agencies last November.

Saudi Arabia leads a coalition of Muslim countries, backed by the U.S., the U.K. and France, in the war in neighboring Yemen. The campaign to restore the government ousted by the Iran-allied militia is part of a larger assertive effort to prevent weapons from reaching Shiite Houthi rebels and their allies, who have overrun much of Yemen. Turkey has also expressed its concern for the deteriorating humanitarian situation and the Houthis' expansion.

Yemen is of critical importance to the U.S. as the country is home to one of America's biggest enemies: al-Qaida, as well as its deadliest franchise, al-Qaeda in the Arabian Peninsula (AQAP), which orchestrated numerous high-profile terror attacks, including the Charlie Hedbo Massacre in Paris, France. Since 2012, the U.S. has launched counterterror airstrikes and operations against radical militants as part of the U.S. national security policy. The U.S.'s "targeted-killing policy" and other practices by the Obama administration have raised serious concerns regarding the rule of law, war crimes and the human cost of the U.S. security policy in Yemen.
RELATED TOPICS