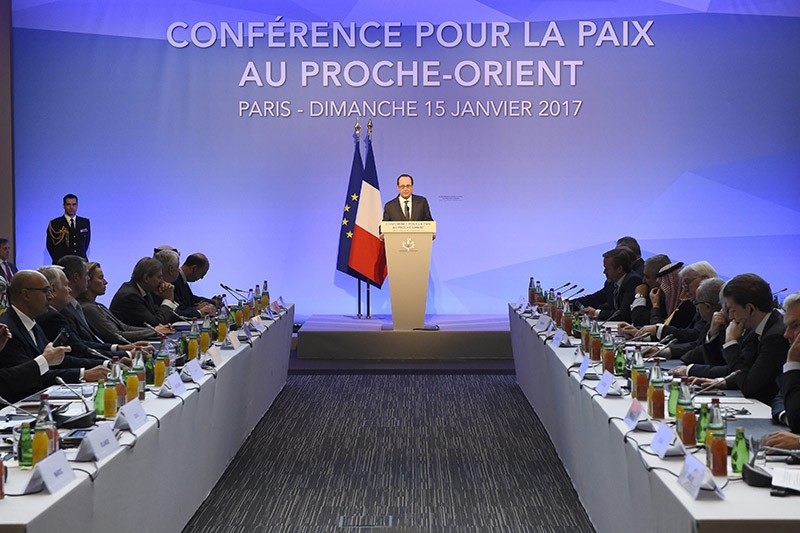 The PLO also called on conference host France "to immediately recognize the State of Palestine on the 1967 borders with east Jerusalem as its capital," and urged all of the approximately 70 countries that attended the meeting in Paris to "recognize Palestine in line with their recognition of Israel".

Diplomats from nearly 70 countries called for a two-state solution in the Middle East in a joint statement Sunday, encouraging the Israelis and Palestinians to achieve peace by pursuing direct negotiations - and avoiding unilateral steps.

They also said that the basis for the negotiations should be the 1967 borders, before Israel occupied the West Bank and east Jerusalem, French Foreign Minister Jean-Marc Ayrault told a press conference.

France organized the gathering to reaffirm global support for a Palestinian state existing alongside an Israeli state -- a scenario the Palestinians fear could be jeopardized by Donald Trump's incoming US administration.

The talks were held just five days before Donald Trump is to be inaugurated as US president.

Trump has said that under his administration the US will move its embassy from Tel Aviv to Jerusalem and recognize the officially divided city as the capital of Israel - dimming hopes for a two-state solution.

The move was rejected by many of those at the conference, including German Foreign Minister Frank-Walter Steinmeier, who warned that it would risk a new escalation of tensions in the Middle East.

French diplomats also said Netanyahu had not responded to invitations to review the outcome of the conference but that Palestinian President Mahmoud Abbas would travel to Paris in the coming weeks to meet with Hollande.

French President Francois Hollande, speaking to diplomats at the conference, said the aim was not to "dictate" the parameters of dialogue to the Israelis and Palestinians, and that only direct negotiations would achieve peace.

"The two-state solution is not the dream of a system of the past, it is still the goal for the future of the international community in all its diversity," Hollande said, in an apparent reference to Netanyahu's earlier statements.

Netanyahu, who insists only direct talks with the Palestinians can bring peace, dismissed the Paris meeting as "a last gasp of the past" and a "futile" exercise.