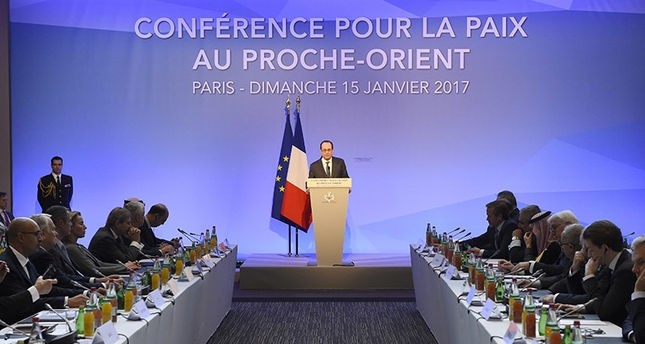 In a new push for renewed peace talks that would lead to a Palestinian state, world diplomats from 70 countries including the Obama administration gathered in Paris while Israeli PM Netanyahu slammed peace talks as ‘futile'

Fearing a new eruption of violence in the Middle East, diplomats from 70 countries gathered in Paris yesterday to try to revive Israeli-Palestinian peace efforts amid fears of a new escalation if the U.S. President-elect Donald Trump implements a pledge to recognize Jerusalem as Israel's capital. The meeting comes at a crucial juncture for the Middle East, five days before Trump, who has vowed unstinting support for Israel, is sworn in as US president.

In his last major diplomatic foray before he leaves office, The US Secretary of State John Kerry joined the conference. It marks the end of eight years of failed U.S. efforts at Israeli-Palestinian diplomacy.

Neither Israel nor the Palestinians are represented at Sunday's conference. Abbas, who has backed the meeting, is expected to travel to Paris in the coming weeks but Netanyahu rejected the offer, French diplomats said.

The conference is meant to be a forceful message to U.S. President-elect Donald Trump and Israeli Prime Minister Benjamin Netanyahu that much of the world wants peace and sees a two-state solution as the best way to achieve it in the Israeli-Palestinian conflict. The talks also aimed to urge Israel and the Palestinians "to officially restate their commitment to the two-state solution." It also affirmed that the international community "will not recognize" changes to Israel's pre-1967 lines without agreement by both sides.

"A two-state solution is the only possible one," French Foreign Minister Jean-Marc Ayrault said in opening the conference, calling it "more indispensable than ever" to solve the protracted conflict.

Netanyahu has snubbed Sunday's conference as "rigged" against Israel, and Trump's incoming administration isn't taking part. "The conference convening today in Paris is a futile conference," Netanyahu told ministers at the start of a weekly cabinet meeting in Jerusalem on Sunday. "It was coordinated between the French and the Palestinians with the aim of imposing upon Israel conditions that are incompatible with our national needs," he said.

Sunday's conference in Paris comes amid increasing concern from Palestinians over US president-elect Donald Trump's unwavering support for Israel.

Palestinian leader Mahmud Abbas warned Saturday that peace could be dealt a mortal blow if Trump, who has vowed unstinting support for Israel, moves the embassy to Jerusalem.Doing so would reverse decades of US policy that has until now maintained that the final status of Jerusalem whose eastern and largely Arab side has been occupied by Israel since 1967 should be determined in peace negotiations with the Palestinians.