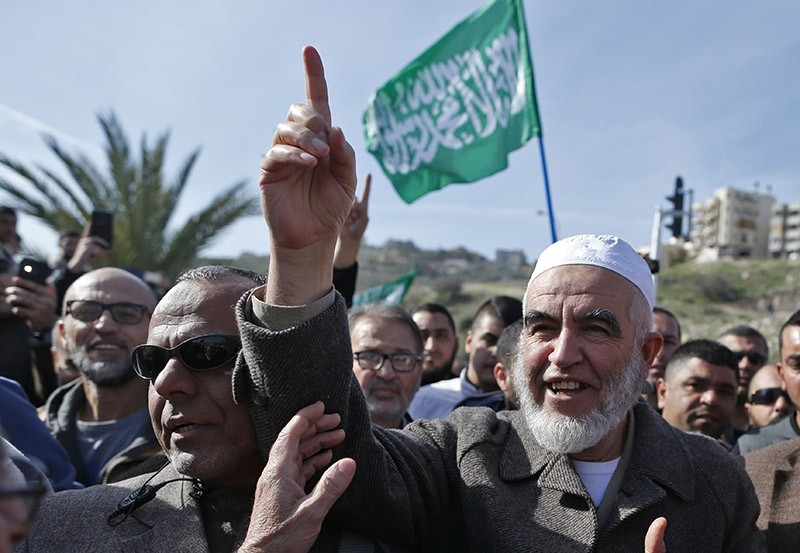 Arab-Israeli Sheikh Raed Salah gestures as he celebrates with supporters in Umm al-Fahm, an Arab-Israeli town 60 kilometers north of Tel Aviv, after he was released from prison on Jan. 17, 2017. (AFP Photo)
by Daily Sabah with Agencies Jan 17, 2017 12:00 am

Israel has released influential Palestinian resistance figure and cleric Sheikh Raed Salah from prison on Tuesday after he completed his nine-month prison term.

Salah's lawyer Halid Zebarika told Anadolu Agency that Israeli prison authority confirmed Salah's release but did not acknowledge from which prison he had been released from.

Sheikh Kemal al-Hatib, chairman of Freedoms Commission of the Arab Higher Monitoring Committee representing Israeli Arabs, told AA that Salah's family was not allowed to greet him upon his exit from the prison compound and that he was forced to take a bus, only to be noticed by another Palestinian.

Salah was greeted by his supporters in Tel Aviv before departing for his native city of Umm al-Fahm in northern Israel, where people have made preparations to greet him.

Raed Salah heads the northern branch of the 1948 Palestine Islamic Movement in Israel, a group that Israel accuses of inciting Arabs to violence and outlawed in 2015. He was sentenced for "incitement to violence" and "incitement to racism" in a 2007 sermon on April 18, 2016.

Salah has had repeated run-ins with Israel and was previously imprisoned for funneling money to Hamas, the group that rules Gaza.

He has been kept in solitary confinement in a cell in a prison in the southern Israeli city of Beersheba since last May, prompting an open-ended hunger strike by Salah in November in protest of his prison conditions.

Salah was born in 1958 in the city of Umm al-Fahm in northern Israel and later studied Islamic Law at the University of Hebron in the Israeli-occupied West Bank.

He served as mayor of Umm al-Fahm for three consecutive terms between 1987 and 2001.

In 1996, Salah was elected leader of the northern branch of the Islamic Movement in Israel, known for holding daily protests at East Jerusalem's flashpoint Al-Aqsa Mosque -- Islam's third holiest site -- against perceived threats to the iconic mosque by the Israeli authorities.