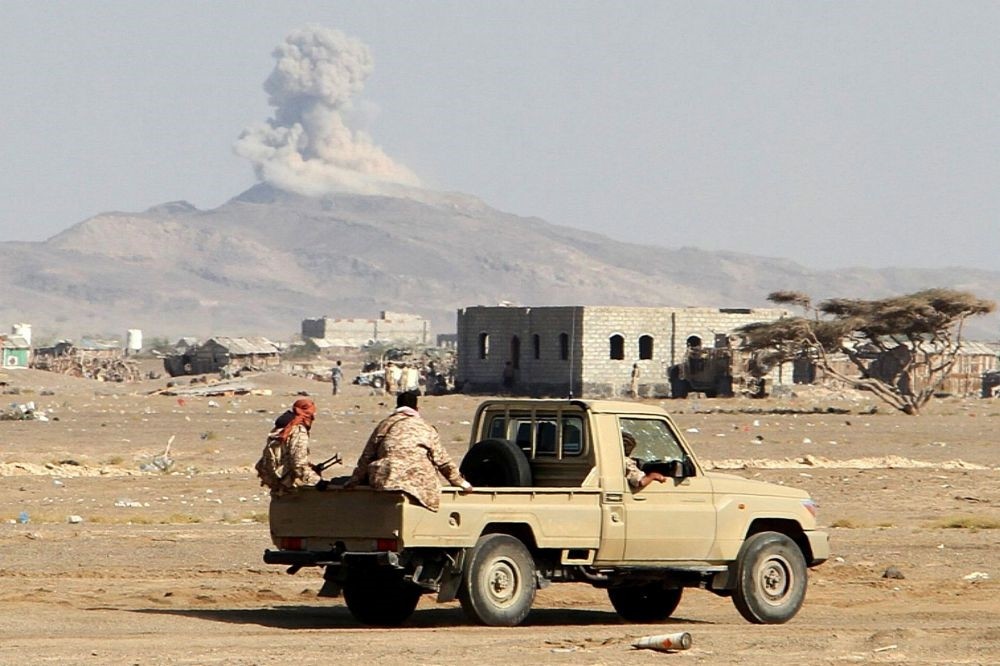 Smoke billows in the distance as Yemeni pro-government forces patrol during clashes against Shiite rebels in Yemen's western Dhubab district on Jan. 9.
by Compiled from Wire Services
Jan 18, 2017 12:00 am

Amid efforts to end the nearly two-year war, the U.N. envoy met with Yemen president Hadi as the civilian death toll from the war reached 10,000, with 40,000 others wounded

The United Nations' humanitarian aid official in Yemen said Monday that the civilian death toll in the nearly two-year conflict has reached 10,000, with 40,000 others wounded.

The Office for the Coordination of Humanitarian Affairs' Jamie McGoldrick told reporters the figure is based on lists of victims gathered by health facilities and the actual number might be higher. This announcement marks the first time a U.N. official has confirmed such a high death toll in Yemen, the Arab world's poorest nation. Earlier, the U.N. reported 4,200 civilians were killed in the war.

"This once more underscores the need to resolve the situation in Yemen without any further delay," U.N. deputy spokesman Farhan Haq said in New York. "There's been a huge humanitarian cost."

McGoldrick's remarks come as U.N. Special Envoy to Yemen Ismail Ould Cheikh Ahmed arrives in the southern city of Aden, which the government of Abed Rabbo Mansour Hadi has turned into a temporary capital, officials said.

According to Yemeni officials, Ahmed will present an amended peace deal to Hadi, who rejected the last initiative. That proposal was supported by the U.S. because it largely recognized the rebels and sidelined Hadi. The officials spoke on condition of anonymity because they were not authorized to speak to the media. Haq, the U.N. spokesman, confirmed that Ahmed is scheduled to meet Hadi on Monday "and he will try to present him with the latest peace proposals." "This is something he's been developing in dialogue with the various parties and that dialogue will continue," he said, adding that he couldn't provide any details."

Peace efforts have stalled because of disagreements over a timeline. Hadi is pressing for an implementation to a U.N. Security Council resolution that stipulates the Houthis' withdrawal from all cities and the handover of weapons. The Houthis are pressing for a political deal in which they would get a share of power for giving up land and arms.

Iran-backed Houthi rebels seized the Yemeni capital Sanaa in September 2014, forcing the internationally recognized government to flee the country. Houthis have also been accused with preventing humanitarian aid. Ships carrying humanitarian aid to people in dire need of help have been seized over the last seven months by Iran-backed Houthis rebels, spokesperson for the Arab coalition Ahmed Asseri said to agencies last November.

Saudi Arabia leads a coalition of Muslim countries, backed by the U.S., the U.K. and France, in the war in neighboring Yemen. The campaign to restore the government ousted by the Iran-allied militia is part of a larger assertive effort to prevent weapons from reaching Shiite Houthi rebels and their allies, who have overrun much of Yemen. Turkey has also expressed its concern for the deteriorating humanitarian situation and the Houthis' expansion. In the latest statement from Ankara, it said Turkey would not recognize the new government formed by Yemen's Houthi movement in the war-torn country. The ministry statement said the formation of a "national salvation" government was 'illegitimate'.
Last Update: Jan 18, 2017 1:07 am