Israel pushes ahead with settlements, approves 566 settler homes in Jerusalem 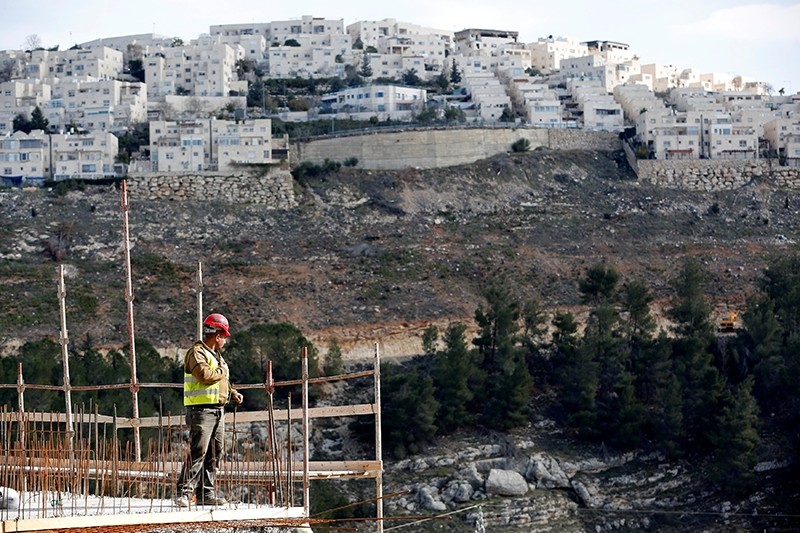 A labourer works at a construction site in the settlement of Ramot, as the Israeli settlement of Ramat Shlomo is seen in the background (Reuters Photo)
by Compiled from Wire Services
Jan 22, 2017 12:00 am

Meir Turjeman told French Press Agency journalists that city officials approved the plans that had been previously postponed at Prime Minister Benjamin Netanyahu's request in the wake of a U.N. Security Council resolution in December against Israeli settlement building.

Turjeman said plans for some 11,000 other homes were also in process in east Jerusalem, though he did not say when they could be moved forward. The new permits are for homes in the settlement neighborhoods of Pisgat Zeev, Ramot and Ramat Shlomo, according to Turjeman, who also heads the planning committee that approved them.

"The rules of the game have changed with Donald Trump's arrival as president," he said. "We no longer have our hands tied as in the time of Barack Obama. Now we can finally build."

Some 570,000 Israelis live in the West Bank and east Jerusalem among more than 2.6 million Palestinians.

Netanyahu said Sunday he would speak with Trump later in the day, their first conversation since the billionaire businessman took office. Trump has pledged strong support for Israel and vowed during his campaign to recognize Jerusalem as the country's capital despite the city's contested status.

Israeli right-wing politicians have welcomed Trump's election, with hardliners who oppose a Palestinian state hoping it will allow them to move forward with their goal of annexing most of the occupied West Bank.

Israel clashed frequently with Obama over construction in areas it conquered in the 1967 Mideast war.

Netanyahu has been unrelenting in his criticism of the Obama administration over what he condemned as its "shameful" decision not to veto a U.N. Security Council resolution calling for a halt to Israeli settlement-building.

The resolution adopted in December at the U.N. changes nothing on the ground between Israel and the Palestinians and likely will be all but ignored by the newly-inaugurated Trump administration.

Most of the world considers settlements illegal or illegitimate.

The U.S. move, along with a sharp speech by U.S. Secretary of State John Kerry about the issue, reinforced tensions between the outgoing Obama administration and Israeli Prime Minister Netanyahu.

But Israel's hardline government has high expectations for Trump, who has signaled he will take a far kinder approach to them. Trump's appointed ambassador to Israel has close ties to Jewish West Bank settlements as does the foundation run by the family of Trump's son-in-law, Jared Kushner.

Newly-inaugurated U.S. President Trump has pledged during his electoral campaign to move the U.S. embassy from Tel Aviv to Jerusalem despite reluctance to do so by past administrations, Republican and Democrat alike.

Palestinians claim eastern Jerusalem as their capital, and the Obama administration accepted an international view that the city's status must be determined at future peace talks. But Trump has promised to reverse decades of U.S. policy by moving the U.S. embassy to Jerusalem from Tel Aviv.