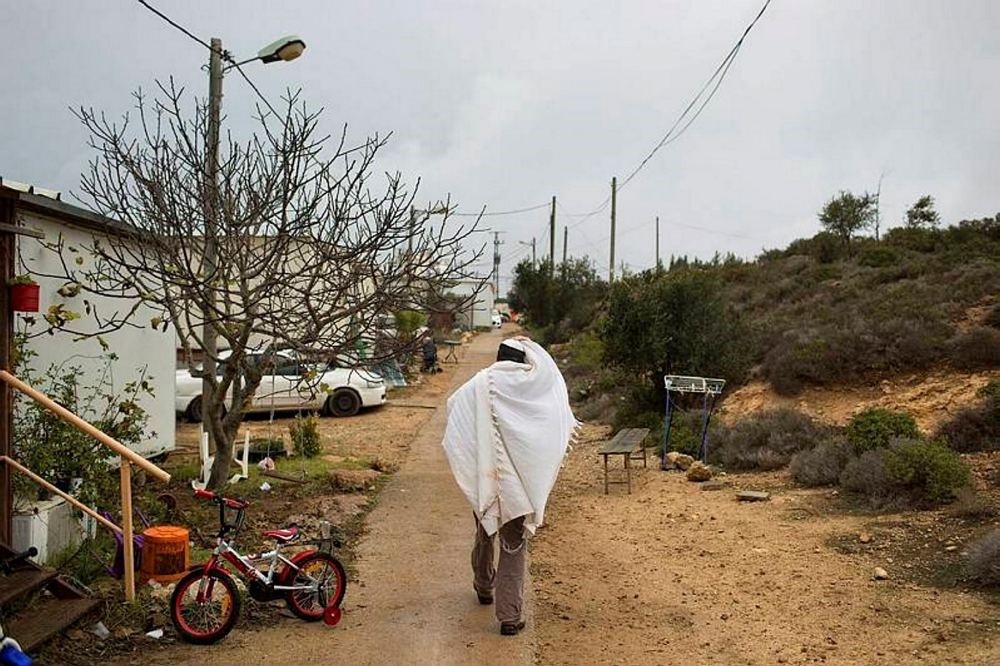 A Jewish settler covered in a prayer shawl walks back to his house in Amona, an unauthorized Israeli outpost in the West Bank.
by Compiled from Wire Services Jan 25, 2017 12:00 am

A deal to evacuate a hardline Jewish outpost that has become a symbol of Israel's occupation of the West Bank was in jeopardy Monday ahead of a Feb. 8 deadline to remove it.

Settlers in the Amona outpost of some 40 families and which was built on Palestinian land accused the government of not living up to the terms of a deal reached in December that would see them moved nearby.

Palestinian landowners also filed a petition to the Israeli high court on Monday with further objections to the government's relocation plans, said rights group Yesh Din, which is representing them.

In response, the court issued an injunction preventing the land plots in question from being taken over while it studies the petition, Yesh Din said.

On Sunday, Prime Minister Benjamin Netanyahu's chief of staff, Yoav Horowitz, reportedly told ministers from his Likud party that the deal could not be implemented because of legal complications. The lack of a clear solution has once again raised the possibility of a forced evacuation of the Amona settlers by the Israeli government and fears that violence could result.

"Right now we're dealing with the fact that the government and officials lied," said Eli Greenberg, an Amona resident and spokesman for the outpost. "They promised all kinds of lies to us."

The Israeli defense ministry unit that oversees civilian affairs in the West Bank did not respond to a request for comment.

The long-running saga has centered on a 2014 high court ruling ordering the outpost northeast of the Palestinian political capital of Ramallah to be evacuated because it was built on private Palestinian land. An initial deadline of Dec. 25, 2016 was given for the outpost to be removed.

But with the deadline approaching, Israeli right-wing politicians rushed to Amona's defense while also promoting a bill to legalize thousands of other settler homes in the West Bank.

Hundreds of hardline Jewish youths also flooded into the outpost in a bid to prevent the evacuation. Negotiations resulted in a deal on Dec. 18 under which Amona residents agreed to relocate peacefully to nearby land considered abandoned.

The court then granted an extension of the deadline to Feb. 8 when the settlers promised to relocate peacefully. But Palestinian landowners objected to the plans, resulting in further legal maneuverings.

Their court petition on Monday objected to a government plan to divide certain plots and called for the deal to be scrapped. "Ever since the notion of using abandoned property was suggested, we have claimed that one injustice cannot be corrected with another, and that additional land cannot be taken over just to appease Amona residents," Yesh Din, executive director Neta Patrick, said in a statement.

Israeli settlements are seen as major stumbling blocks to peace efforts as they are built on land the Palestinians see as part of a future state of their own.

While all Israeli settlement building in the occupied West Bank is illegal under international law, outposts are also considered illegal under Israeli law because they are built without the state's official approval. Settlements such as Amona are called outposts -- those that Israel has not approved.

On Jan. 22, the Jerusalem municipality has approved building permits for 566 housing units in three east Jerusalem settlements, two days after Donald Trump takes the presidential office in the United States.

Some 570,000 Israelis live in the West Bank and east Jerusalem among more than 2.6 million Palestinians.
RELATED TOPICS