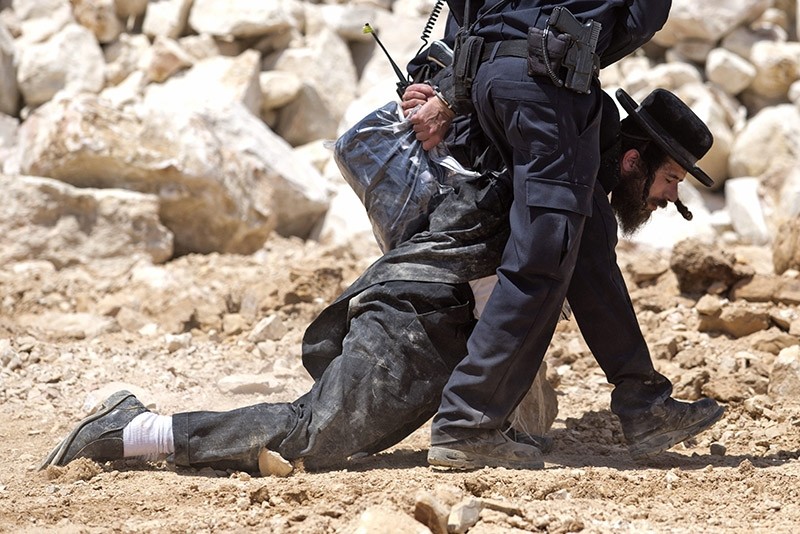 Israeli police arrest an Ultra-Orthodox Jews that came to protest at a construction site in downtown Jerusalem, Israel, 17 August 2015. (EPA Photo)
by Compiled from Wire Services Feb 08, 2017 12:00 am

Demonstrators in several cities including Jerusalem were protesting the arrest of a young Orthodox conscientious objector. They clashed with police and lobbed stones, Israeli television reported.

Police "take zero tolerance toward violent riots" a statement said. It also said at least three officers were injured by stones thrown by the protesters and a police photograph showed one officer bleeding from the face.

Another policeman was taken to hospital with a dislocated shoulder from scuffles with the rioters.

There were similar confrontations in the town of Beit Shemesh, west of Jerusalem; in ultra-Orthodox Bnei Brak, adjacent to Tel Aviv, and in the southern town of Ashdod, Rosenfeld said.

Many ultra-Orthodox oppose military service for their young men because they believe it exposes them to influences and temptations not found in the insular world of prayer and religious study.

They see the spiritual life as no less an act of service to the Jewish state than serving in the military.

Full-time seminary students can claim exemption or deferral from the draft but they must sign on at the enlistment office in order to qualify.

Some refuse to cooperate with any part of the process as a matter of principle and are then arrested as draft-dodgers.

Israeli men have to serve three years in the armed forces while women serve two years. Until recently ultra-Orthodox Jews were exempted from military service, and they have challenged reforms introduced in 2014 that call on them to serve.