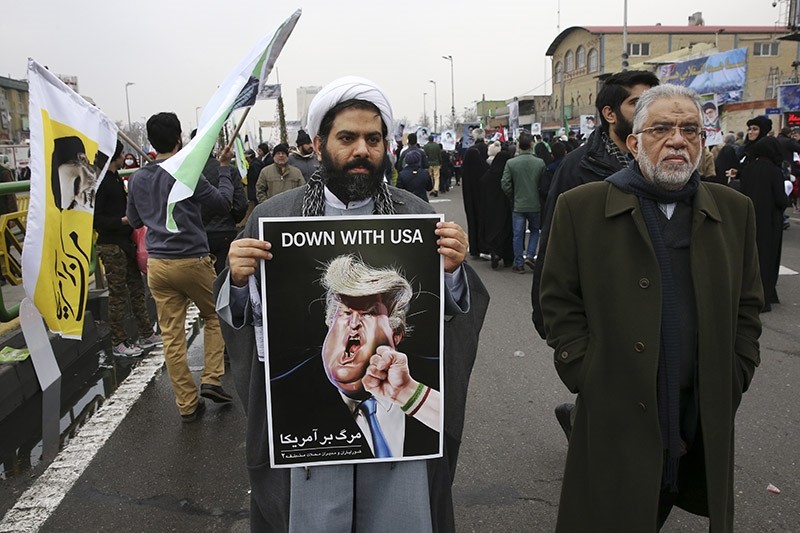 Hundreds of thousands of Iranians rallied across Iran on Friday to swear allegiance to the Iranian regime following U.S. President Donald Trump's warning that he had put the Iran "on notice", state TV reported.

Carrying "Death to America" banners and effigies of Trump, Iranians in Tehran marched towards the Azadi ( Freedom) Square to commemorate the anniversary of Iran's 1979 Revolution that toppled the U.S.-backed shah.

Iran's most powerful authority Supreme Leader Ayatollah Ali Khamenei had on Tuesday called Iranians to take part in the demonstrations to show Iran was not frightened of American "threats."

"America and Trump cannot do a damn thing. We are ready to sacrifice our lives for our leader Khamenei," a young Iranian man told state TV.

Last week Trump put Iran "on notice" in reaction to a Jan. 29 Iranian missile test and imposed fresh sanctions on individuals and entities. Iran said it will not halt its missile programme.

Pragmatist President Hassan Rouhani also called on Iranians to join the rally on Friday to "show their unbreakable ties with the Supreme Leader and the Islamic Republic."

State television said millions turned out nationwide at revolution rallies in all main cities marked by the traditional anti-U.S. and anti-Israel slogans and the burning of U.S. flags.

Both U.S.-based social media sites are blocked in Iran by a wide-reaching government censor but they are still commonly used by millions of Iranians who use special software to get around the restrictions. Iranian officials, including Khamenei, have Twitter and Facebook accounts despite the ban.

Trump has criticised a nuclear deal reached between Iran, the United States and other major powers in 2015 aimed at curbing the country's nuclear work.

Most of the sanctions imposed on Iran were lifted last year under the deal.