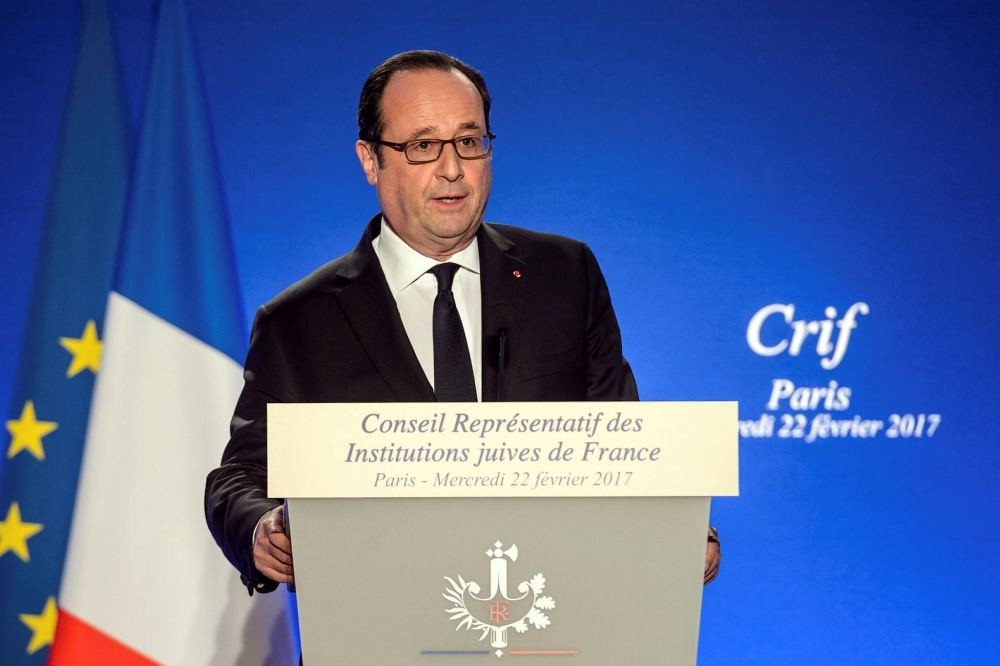 French President Franu00e7ois Hollande speaks at the annual dinner of the Representative Council of France's Jewish Associations (CRIF) in Paris, Feb. 22.
by Daily Sabah with Wires Feb 24, 2017 12:00 am

Home to Europe's largest Muslim and Jewish communities, France insists on a two-state solution for maintaining the peace process in the Israeli-Palestinian conflict with uncertainty surrounding how the Trump administration, favoring Israel, will handle the issue

France is committed to a two-state solution for the Middle East conflict, President François Hollande said amid the U.S. President Donald Trump's pro-Israel policies hampering the peace process in the region.

President Hollande, addressing an event hosted by the CRIF umbrella grouping of Jewish organizations, said a two-state solution was the only guarantee for Israel to remain a "pluralist and democratic society."

Hollande said there was only one way to have peace in the Middle East and that was to have Israel and Palestine side by side. He said it was up to the Israelis and Palestinians to come to an agreement on each issue, especially on the status of Jerusalem. France would continue to monitor freedom of access and worship for Jews, Christians and Muslims in the holy city, he told the audience. "This is the French position and I'm sure it won't change," he added, weeks before he is due to leave office.

France's stance on the Israel-Palestine conflict has been in favor of the creation of a Palestinian state as France supports Palestine's membership in the U.N. cultural agency, UNESCO, and its observer non-member state status at the U.N.

France has repeatedly tried to breathe new life into the peace process this year, holding a Middle East peace conference in Paris and calling for Israel and the Palestinians to embrace a two-state solution as the only route to peace. However, Israel declined France's invitation for a peace conference, stating that the attempts from Palestinians and French were "useless."

The two-state solution has long been the cornerstone of U.S. and international policy and Trump's row-back met with hostility from other world powers when he made his remarks last week.

The official U.S. position on Israeli-Palestinian conflict continued favoring bilateral negotiations as the only path to an agreement despite Trump's controversial comments on two-state solution during a press conference with Netanyahu. Amid warming relations between U.S.-Israeli relations under Trump era, there has still been controversy over whether Trump has any new policy toward the Palestinian-Israeli conflict, but to also ask, or he has any policy at all.

Following Trump's comments last week on shifting away from an independent Palestinian state alongside Israel, France's ambassador to the UN stressed that his country's commitment to a two-state solution is "stronger than ever."

Israel has long maintained that only direct negotiations with the Palestinians can lead to peace and sees France's efforts as a diversion. Despite U.S. attempts to resolve the conflict during the former U.S. President Barack Obama's administration, talks have stalled over issues including settlements and Palestinian political divisions. U.S.-Israeli relations under former President Barack Obama hit all-time lows after the White House signed a nuclear deal with Iran, which is considered Israel's biggest and most dangerous enemy. Moreover, the Obama administration opposed the new illegal settlements and abstained from the United Nations Security Council vote condemning Israel's illegal settlements.

Peace efforts have been at a complete standstill since a U.S.-led initiative collapsed in April 2014. During the latest Israeli onslaught in Gaza in 2014, more than 2,100 Palestinians, most of them civilians, were killed during the Gaza conflict last July and August. Sixty-seven Israeli soldiers and six civilians in Israel were killed by rockets and attacks by Hamas and other groups. Israel maintains a blockade in Gaza to keep material it believes could be used for military purposes from entering the impoverished enclave of 1.9 million people.
RELATED TOPICS