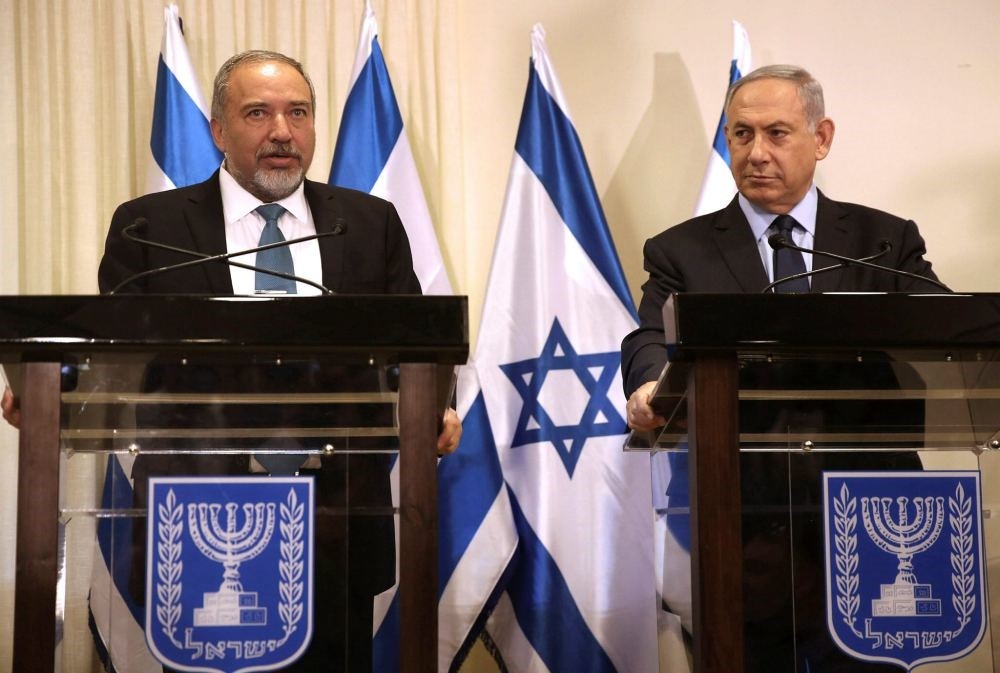 Israeli Defense Minister Avigdor Lieberman and Prime Minister Benjamin Netanyahu at the Knesset, the Israeli parliament in Jerusalem.
by Daily Sabah Mar 02, 2017 12:00 am

As Israel's arch-foe Iran has recently gained a strong position in the Middle East, Israeli Defense Minister Lieberman proposed a Sunni pact to the Gulf States and Saudi Arabia

Israel has proposed a NATO-style alliance in the Middle East to the Gulf States, including Saudi Arabia, in order to challenge the Tehran regime in the region.

"It is time to formally form a formal alliance, a coalition of all moderate forces in the Middle East against terror," said Israeli Defense Minister Avigdor Lieberman.

"If there is a real coalition, you have real commitments," Liebermann said, taking direct reference from NATO. "Look at NATO. It is based on the principle that each country is ready to protect all others, and is protected by all others." "The best news I have heard lately is that the moderate Sunni states understand that the greatest danger for them is not Israel or Judaism or Zionism, on the contrary the danger is Iran."

Lieberman said it does not matter "whether the partners of such an alliance are Muslims, Jews or Christians."

Israel is worried about an Iranian presence in its neighbor. As long as Iran has the power to dominate Damascus and mobilize Shiite groups, there will be more conflict with Israel.

Sunni Muslim-dominated Saudi Arabia and Shiite Muslim-majority Iran are regional rivals. The Sunni majority Saudi kingdom is engaged in a power struggle with the Shiite country for dominance in the region. Tehran is also a major foe of both Washington and Riyadh.

Iran's heavy involvement in Syria seemingly disturbs Israel as Iran has gained a considerable position in the region.

Since the war broke out, Israel has supported Bashar Assad's removal and made warnings about the advancement of Iran and its proxies.

The former U.S. President Barack Obama has been very reluctant to make any step to change the war's fate but started supporting the PKK's Syrian branch under the pretext of waging war against Daesh. When Turkey launched a military operation against Daesh, there was no U.S. support. In addition, while Iran has been strengthening its position in Syria, U.S.-Israeli relations have run aground over the disputes between Obama and Israeli Prime Minister Benjamin Netanyahu.

President Donald Trump has expressed his clear support for Israel and has shown a very negative stance toward Iran. Trump opposed the nuclear agreement signed by Israel's arch-foe Iran and world powers, including the United States, in 2015 and has said he wants to undo it. The so-called Muslim ban includes Iranian citizens, and it reflects that the Trump administration considers Iran a center of terrorism. It needs to be noted that while Russia and Israel share similar concerns in the region, Russia's close cooperation with Iran is likely disturbing Israel. Yet, Turkey and Israel are in a very similar position when it comes to the war in Syria. Both of the countries want Assad to leave the post and Iran to stop supporting Shiite militants. Iran has helped the Assad regime throughout the war, dispatching thousands of soldiers, mobilizing the Hezbollah group and delivering millions of dollars, despite its troubled economy due to international sanctions.
RELATED TOPICS