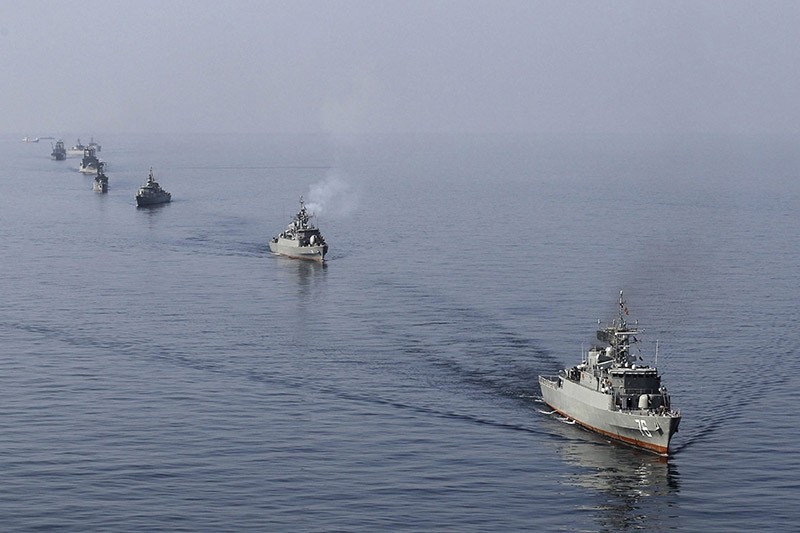 Iranian naval ships take part in a naval parade on the last day of the Velayat-90 war game in the Sea of Oman near the Strait of Hormuz in southern Iran. (File Photo)
by Compiled from Wire Services Mar 07, 2017 12:00 am

With U.S.-Iran relations becoming more hostile than ever before, fast-moving Iranian vessels which came close to a U.S. Navy ship accompanied by the British Royal Navy in the Strait of Hormuz forced them to change course

The boats came within 600 yards of the USNS Invincible, a tracking ship, and stopped. The Invincible and three ships from the British Royal Navy accompanying it had to change course to avoid any collision, Pentagon spokesman Navy Capt. Jeff Davis said.

"This was assessed to be a combination of unsafe or unprofessional behavior," the spokesman added.

The Pentagon has previously voiced concern over a string of high-profile incidents in waters off Iran, where the Iranian Revolutionary Guard Corps (IRGC) frequently conducts risky maneuvers around U.S. vessels, including some where the Americans have had to fire warning shots.

The USNS Invincible is equipped with powerful radar equipment that can follow ballistic missile trajectories. The prefix "USNS" means the ship belongs to the U.S. Navy but is unarmed or only lightly armed.

While still a presidential candidate in September, Donald Trump vowed that any Iranian vessels that harassed the U.S. Navy in the Gulf would be "shot out of the water."

Similar incidents happen occasionally, but the last serious one was in January when a U.S. Navy destroyer fired three warning shots at four Iranian fast-attack vessels near the Strait of Hormuz after they closed in at high speed and disregarded repeated requests to slow down.

"Well I don't know how much of a pattern it is, we actually had seen quite an improvement in Iran's behavior until recently," Capt. Davis told reporters.

Davis said that dangerous interactions were a matter of concern because they could lead to a "miscalculation or an accidental provocation."

Iran's navy routinely holds war games it says are aimed at improving its readiness against threats. It also sends its warships to international waters off the Gulf of Aden to fight piracy.

Iran's navy began an annual drill last week near the strategic Strait of Hormuz, its first major exercise since the inauguration of President Trump. The tension has escalated between the two countries after Iran test-fired a new ballistic missile earlier this month, prompting Washington to impose some new sanctions on Tehran.

The Trump administration ordered sanctions against more than two dozen people and companies from the Persian Gulf to China in retaliation for Iran's recent ballistic missile test, increasing pressure on Tehran without directly undercutting a landmark nuclear deal with the country.

It is Trump's first package of penalties against Iran, reflecting his insistence on a tougher stance toward Tehran. After tightening sanctions against Iran in response to a ballistic missile test, White House officials said the measures were an "initial" step. U.S. Gulf allies have long favored a tougher U.S. stance against Iran, whom they blame for regional interference.

Throughout his election campaign, Trump accused the Obama administration of being weak on Iran, and he vowed to crack down.