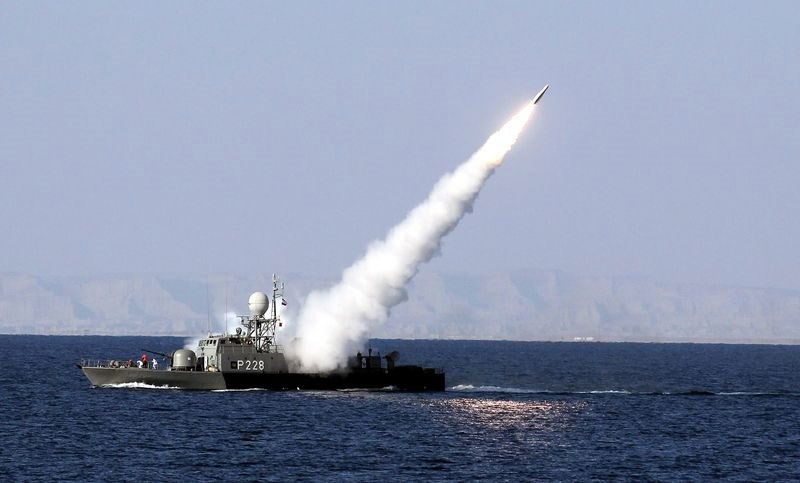 An Iranian navy warship test fires a new long range missile (Mehrab) during the Iranian navy military exercise on the Sea of Oman, near the Strait of Hormuz. (EPA File Photo)
by Compiled from Wire Services Mar 10, 2017 12:00 am

In a move likely to heighten concern in Washington whose warship operates near its waters, Iran announced that it ‘successfully’ tested a naval ballistic missile this week, with the ability to destroy a floating target from a 250-kilometer distance

Iran has successfully test-fired a naval missile which hit its target 250 kilometers (155 miles) away, local news agencies reported Thursday. The missile test was carried out at a time of heightened tension between Iran and the United States.

The Hormuz 2 is capable of hitting floating targets with high accuracy within a range of 300 kilometers, Fars said. It provided no additional details. Meanwhile, the semiofficial Tasnim news agency quoted Hajizade as saying the Revolutionary Guard had prepared a ballistic missile for civilian purposes but plans to launch it were canceled after a threat by the United States.

"We have prepared a ballistic missile for carrying a satellite for civilian purposes ... but some people sent it to the warehouse after a threat by the Americans. This behavior is humiliating," he said.

According to the local news agencies the new Hormuz-2 missile has a maximum range of 300 kilometers.

On Wednesday a senior Revolutionary Guards official accused the United States of provoking tensions after two separate incidents in the Gulf last week.

"A U.S. Navy ship crossing the Strait of Hormuz changed its international route and approached to within 550 meters of Revolutionary Guards' boats in an unprofessional way," Mehdi Hashemi told the Guard's website Sepahnews. He said actions by the United States and the United Kingdom in recent days showed they have "harmful, illegitimate and provocative objectives."

Similar incidents happen occasionally, but the last serious one was in January when a U.S. Navy destroyer fired three warning shots at four Iranian fast-attack vessels near the Strait of Hormuz after they closed in at high speed and disregarded repeated requests to slow down.

The spike in tensions follows the inauguration of Donald Trump as U.S. president. While still a presidential candidate in September, Donald Trump vowed that any Iranian vessels that harassed the U.S. Navy in the Gulf would be "shot out of the water."

Iran's navy began an annual drill last week near the strategic Strait of Hormuz, its first major exercise since the inauguration of President Trump. The tension has escalated between the two countries after Iran test-fired a new ballistic missile earlier this month, prompting Washington to impose some new sanctions on Tehran.

The Trump administration ordered sanctions against more than two dozen people and companies from the Persian Gulf to China in retaliation for Iran's recent ballistic missile test, increasing pressure on Tehran without directly undercutting a landmark nuclear deal with the country.

It is Trump's first package of penalties against Iran, reflecting his insistence on a tougher stance toward Tehran. After tightening sanctions against Iran in response to a ballistic missile test, White House officials said the measures were an "initial" step. U.S. Gulf allies have long favored a tougher U.S. stance against Iran, whom they blame for regional interference.