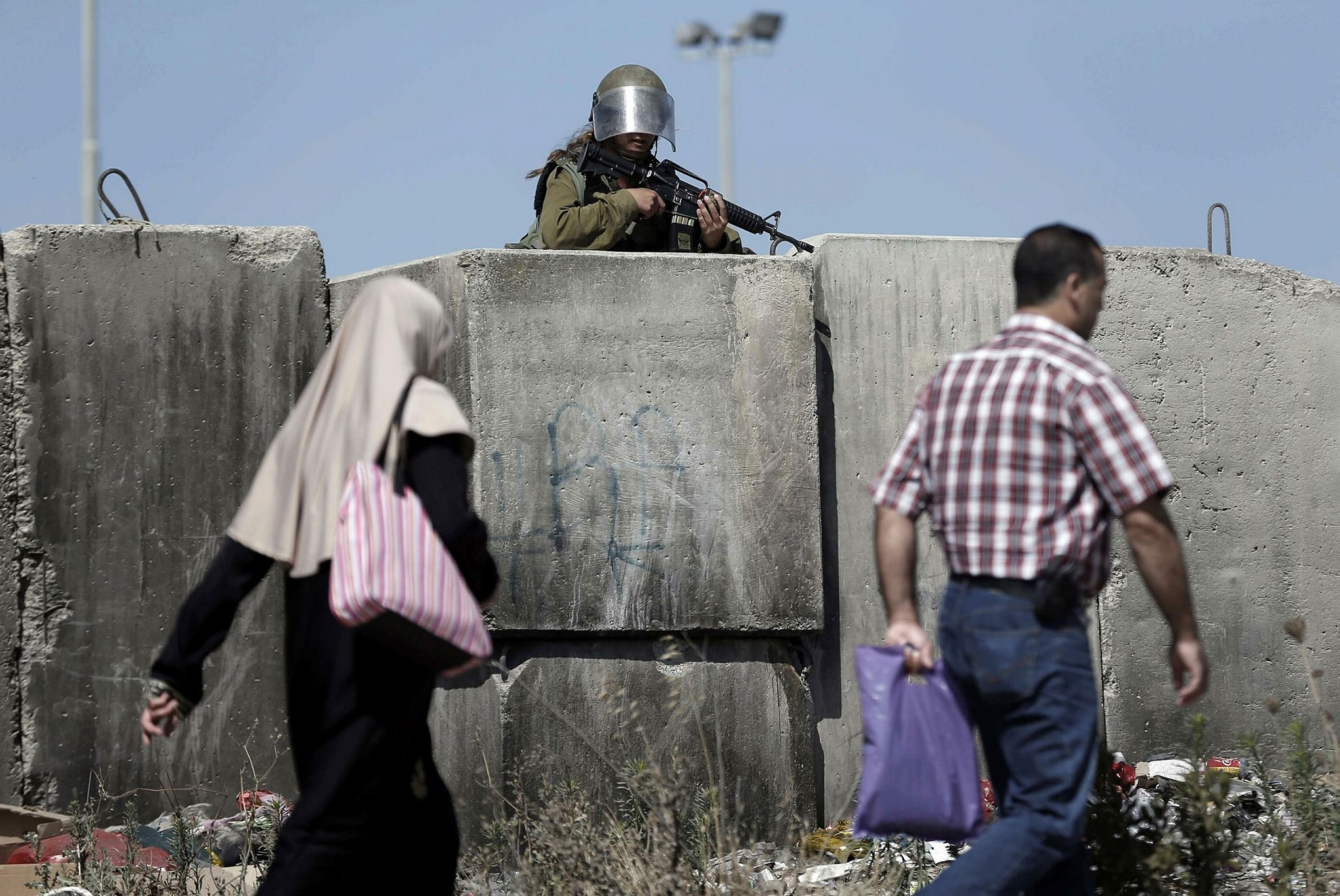 A female Israeli soldier stands guard at the Qalandia checkpoint, south of Ramallah, as thousands of Palestinians wait to cross from the West Bank to Jerusalem.
by Compiled from Wire Services Mar 17, 2017 12:00 am

The U.N. has accused Israel of imposing an ‘apartheid regime' of racial discrimination on the Palestinian people, the first time a U.N. agency has levelled such a statement

A U.N. agency published a report on Wednesday accusing Israel of imposing an "apartheid regime" of racial discrimination on the Palestinian people, and said it was the first time a U.N. body had clearly made the charge.

ESCWA hoped the report would inform further deliberations on the root causes of the problem in the United Nations, among member states, and in society, Rima Khalaf, a Jordanian who heads the Beirut-based agency said at an event to launch the report at ESCWA's Beirut headquarters.

The report was authored by Richard Falk, a former U.N. human rights investigator for the Palestinian territories, and Virginia Tilley, professor of political science at Southern Illinois University. Before leaving his post as U.N. special rapporteur on human rights in the Palestinian territories in 2014, Falk said Israeli policies bore unacceptable characteristics of colonialism, apartheid and ethnic cleansing.

The United States accused him of being biased against Israel. The U.S. demanded that U.N. Secretary-General Antonio Guterres withdraw a report by a U.N. body accusing Israel of imposing apartheid on the Palestinians. Guterres distanced himself from the report by the U.N. Economic and Social Commission for Western Asia (ESCWA) but U.S. Ambassador Nikki Haley said it should be scrapped altogether. "The United States is outraged by the report," said Haley in a statement. "The United Nations secretariat was right to distance itself from this report, but it must go further and withdraw the report altogether."

The report found that Palestinians were subjected to a "strategic fragmentation" that allowed Israel to impose "racial domination" with different sets of laws by geographic regions. The analysis showed "beyond a reasonable doubt" that "Israel is guilty of imposing an apartheid regime on the Palestinian people, which amounts to the commission of a crime against humanity."

The furor came ahead of a Security Council meeting next week to hear the first report from the United Nations on implementing a resolution demanding an end to Israeli settlement building.

President Donald Trump has been more sympathetic to Israel's settlement policies than the fiercely critical Obama administration, and has also vowed to move the U.S. Embassy from Tel Aviv to contested Jerusalem. Israel's nationalist government has welcomed the prospective change in policy, but it also risks igniting Palestinian and even regional unrest.

The Palestinians want the West Bank as well as the Gaza Strip and east Jerusalem, areas captured by Israel in the 1967 war, as part of their hoped-for state. The Palestinians want these areas along with the Gaza Strip for the establishment of a future Palestinian state. International law views the West Bank and east Jerusalem as "occupied territories" and considers all Jewish settlement-building activity on the land as illegal.
RELATED TOPICS