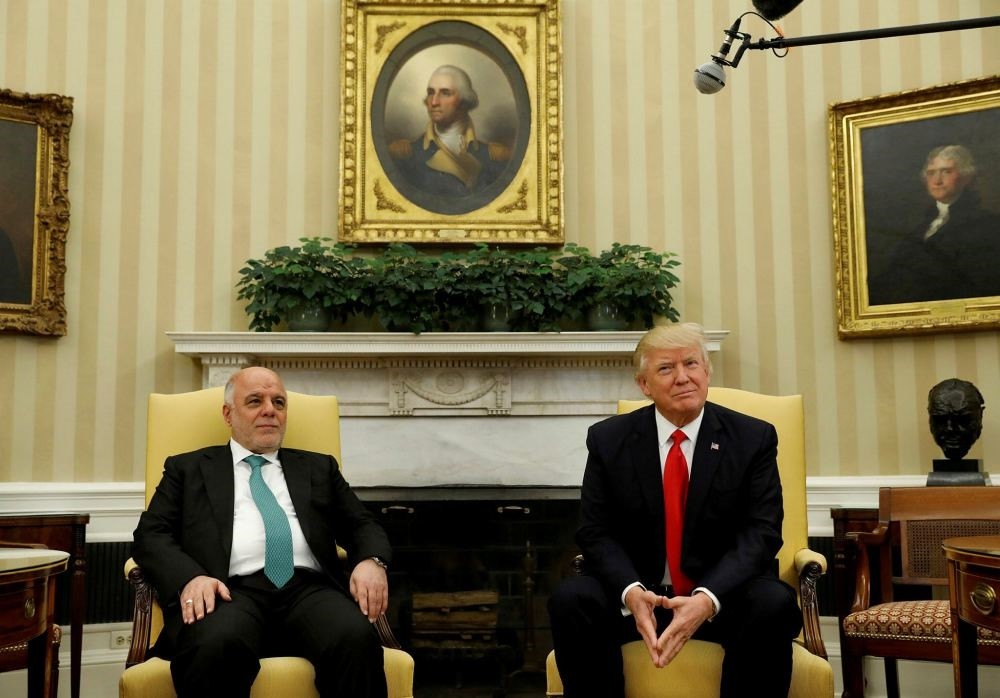 President Donald Trump said the operation against the Daesh terrorist group in Mosul is "moving along," as he hosted Iraqi leader Haider al-Abadi at the White House on Monday.

In a meeting on the 14th anniversary of the U.S. invasion, Trump questioned whether the United States should have pulled combat troops out of the country.

"We should never ever have left," he said, after previously having supported the withdrawal.

Trump said he hopes to address the "vacuum" that was created when Daesh moved into Iraq and added that "we shouldn't have gone in [to Iraq]" in the first place.

"We will figure something out. I mean, we have to get rid of Daesh," he said.

Meanwhile, Iraqi Prime Minister Abadi said, "I think they are prepared to do more," referring to the administration of former President Barack Obama, which was reluctant to commit large numbers of U.S. troops to com

Obama's approach relied on training and supporting local forces aiming to push the militants out of much of the territory they once held.

The Iraqi prime minister said he had received assurances of greater U.S. support in fighting Daesh militants but cautioned that military might alone would not be sufficient. Abadi's remarks followed his first face-to-face meeting at the White House with Trump, who took office on Jan. 20, pledging a new strategy to defeat the hardline militant group that seized large swathes of Iraq and Syria in 2014.

Even before Trump took office, Iraqi forces had recaptured a string of major cities from Daesh, shrunk the militant group's finances and significantly stemmed the flow of foreign fighters, all with the support of U.S.-led coalition airstrikes and military advisers.

rack Obama's administration had been.

"I think they're prepared to do more to fight terrorism and be more engaged," Abadi told a forum in Washington hours after his meeting with Trump, adding he had been told that the U.S. support "will not only continue but will accelerate."

"But of course we have to be careful here," Abadi said. "We are not talking about military confrontation as such. Committing troops is one thing, while fighting terrorism is another thing."

In the readout of the pair's meeting, the White House said the United States and Iraq "stand fully committed to a comprehensive partnership, rooted in mutual respect" and agreed to "pursue a long-term partnership to decisively root out terrorism from Iraq and strengthen the Iraqi military and other key institutions."

"Although Daesh remains a dangerous enemy, we are confident it will be defeated," it said.

Trump campaigned on a promise to dramatically ramp up the assault on Daesh and has vowed to eradicate it.

Abadi is in Washington this week ahead of a gathering of world leaders from the coalition fighting Daesh. In many ways, his visit comes at a high point, after he successfully appealed to Trump to remove Iraq from a list of countries included in a revamped travel ban.

Trump decided this month's revised order temporarily banning the entry of travelers from several Muslim-majority nations would not include Iraq because of its cooperation with the United States.

Both the initial Jan. 27 travel ban and the revised version have been blocked by federal courts. "I thank you for removing Iraq from the presidential order... This was a positive response to the Iraqi request that betters the relationship with Iraq and the value of Iraq as far as Iraqi-American relations," Abadi told Trump.
RELATED TOPICS