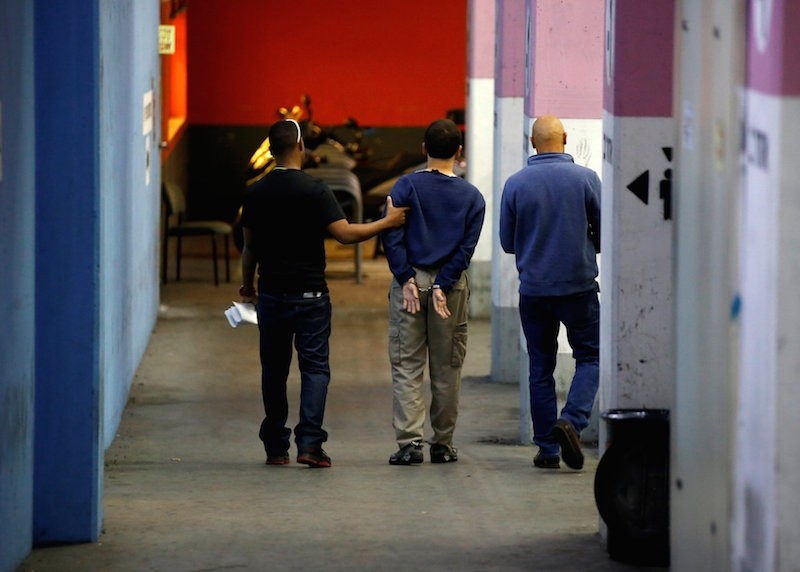 Israeli teen (C) arrested in Israel on suspicion of making bomb threats against Jewish community centres in the United States, Australia and New Zealand over the past three months. (Reuters Photo)
by Compiled from Wire Services Mar 23, 2017 12:00 am

A 19-year-old Israeli has been arrested in connection with dozens of bomb threats made against Jewish organizations across the United States, says police spokesman Micky Rosenfeld.

Police spokeswoman Louba Samri said the suspect was "a resident of the south (of Israel) from the Jewish community".

Police searched the suspect's house in southern Israel as part of a coordinated investigation between Israeli authorities and foreign law enforcement bodies, including the FBI, over the past month, police said.

The head of a Jewish community center in New Jersey that had been targeted by bomb threats said he's thankful that U.S. and international law enforcement prioritized the investigation and have caught a suspect.

Jordan Shenker, head of the Kaplen JCC on the Palisades in Tenafly, said he is cautiously optimistic that the man arrested in Israel on Thursday acted alone and that the threats will be over.

Shenker said the arrest has led to a feeling of being able to exhale, but that the center has always prioritized security and will continue to do so.

The Anti-Defamation League says there have been more than 150 bomb threats against U.S. Jewish community centers and day schools in the U.S. since Jan. 9, including Tenafly and Cherry Hill.