US will forge a 'great bond' with 'friend and ally' Egypt, Trump tells Sisi 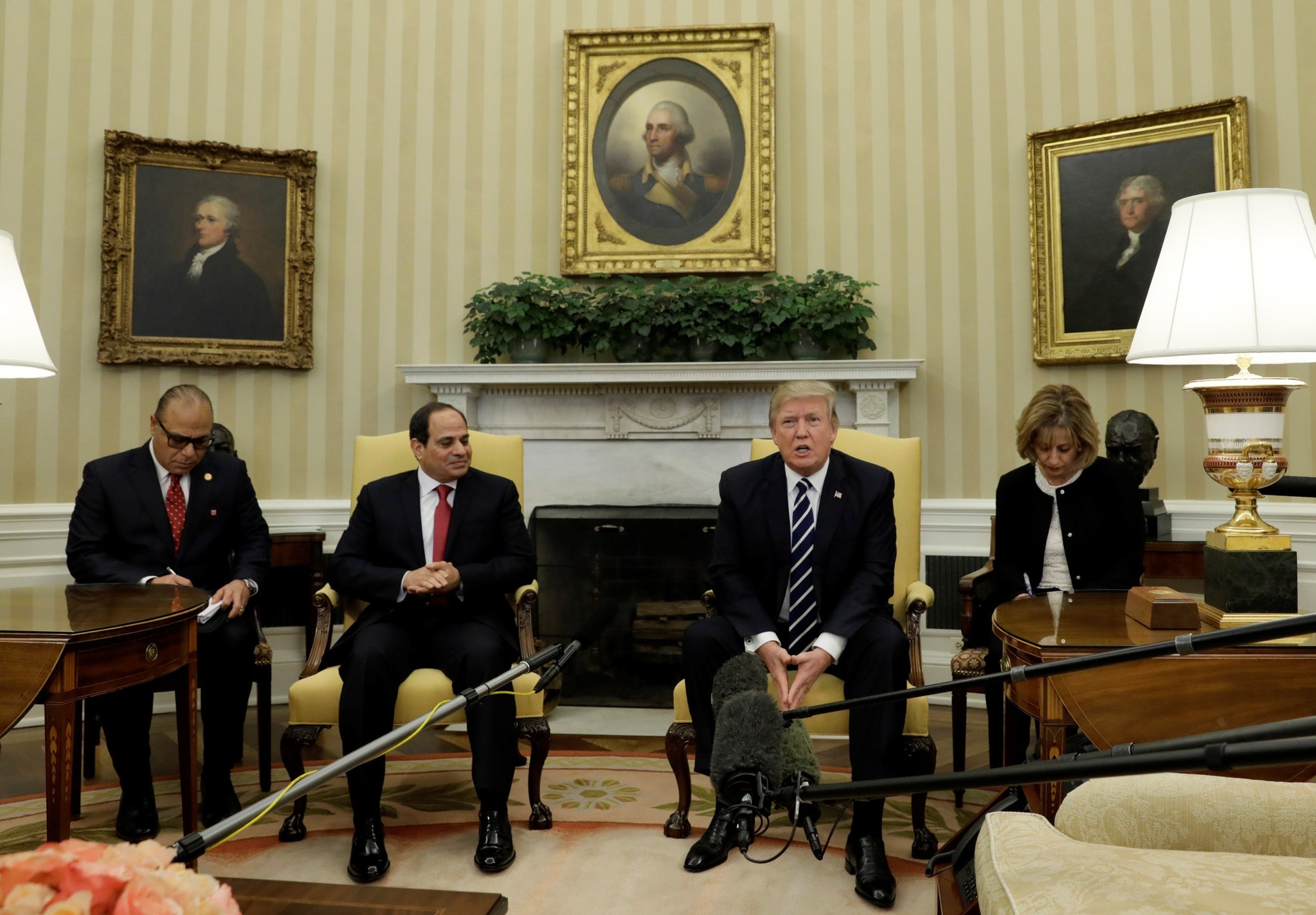 U.S. President Donald Trump speaks during his meeting with Egyptian President Al Sisi in the Oval Office of the White House. (Reuters Photo)
by Compiled from Wire Services Apr 03, 2017 12:00 am

U.S. President Donald Trump signaled a new era in U.S.-Egypt relations on Monday, assuring his Egyptian dictator that years of tepid relations will now give way to a "great bond" between their two nations.

Obama never invited the Egyptian leader to the White House and Egypt's government was repeatedly admonished over its human rights record. Obama even briefly suspended some U.S. military aid.

It's the second meeting for the pair. Reflecting on their first encounter in New York shortly before the general election, Trump said Sisi is someone "very close to me."

Sisi hailed Trump on Monday for his "unique personality" and said that after their first meeting, "I bet on you," the latter being comments he made in Arabic that were not translated.

For Egypt, the objective is clear: Help us help you.

In recent months, U.S. and Egyptian officials have sought to stress commonalities.

Like Trump, Sisi believes he can eradicate radical Islamic extremism.

"Together, we will fight terrorism and other things and we're going to be friends for a very, very long time," Trump said, citing a "great bond with the people of Egypt."

Sisi vowed to work with the U.S. "to counter this evil ideology that is claiming innocent lives, that is bringing devastation to communities and nations and that is terrorizing the innocent people."

Egypt is among the top recipients of U.S. military and economic assistance, but the aid is being evaluated as part of the Trump administration's push for dramatic budget cuts to diplomacy and development. It receives $1.3 billion annually in aid, plus hundreds of millions in economic assistance from the U.S. Agency for International Development and other programs potentially on the chopping block.

Trump has vowed to work closely with Arab allies in the fight against Daesh. As a neighbor to the Hamas-controlled Gaza Strip, Libya and Sudan, maintaining stability in Egypt is a high priority. But it has sometimes been a relationship from which the U.S. receives little in return, and Trump has said he won't tolerate imbalances in other partnerships, as with China and many European allies.

Egypt's economy is forecast to grow by 4 percent this year, according to the World Bank, but the figure heavily accounts for capital gains in oil and gas.

Conditions on the Egyptian streets tell a very different story.

Unemployment hovers at 12.7 percent — a sore spot for millions of Egyptians who protested in 2011 to demand the removal of then-President Hosni Mubarak. Then, unemployment was 9 percent. Youth are hardest hit by job shortages, with about 30 percent out of work.

Since then, extremist attacks have spiked, particularly on the Sinai Peninsula which borders Israel and Gaza. Cairo — home to some 20 million people — has seen several militant attacks, including a December bombing at a church that killed more than two dozen people.

Egypt's minority Christians, who comprise about a tenth of the population, are particularly encouraged by Trump's presidency, hoping the American president will team up with Sisi to more forcefully address Egypt's growing extremism.

For Trump and Sisi, it's also a meeting of kindred spirits.

Both maintain a contentious relationship with the media and believe "bad" or "evil" people are infiltrating their borders. Both whip up supporters with talk of victories and seek to project a mystic sense of inevitable success. They've both challenged whether their country's judges are acting as roadblocks to democracy.

Sisi, like Trump, is widely viewed as a polarizing figure in his country. That view manifesting itself on the streets outside the White House Monday, where rival protests for and opposing both Trump and Sisi swelled before the Egyptian's arrival.

In the sea of American and Egyptian flags, some chanted "We love Sisi, we love Trump!" Others held signs of Sisi and Trump and chanted "Illegitimate," a cry harkening back to the Arab Spring.