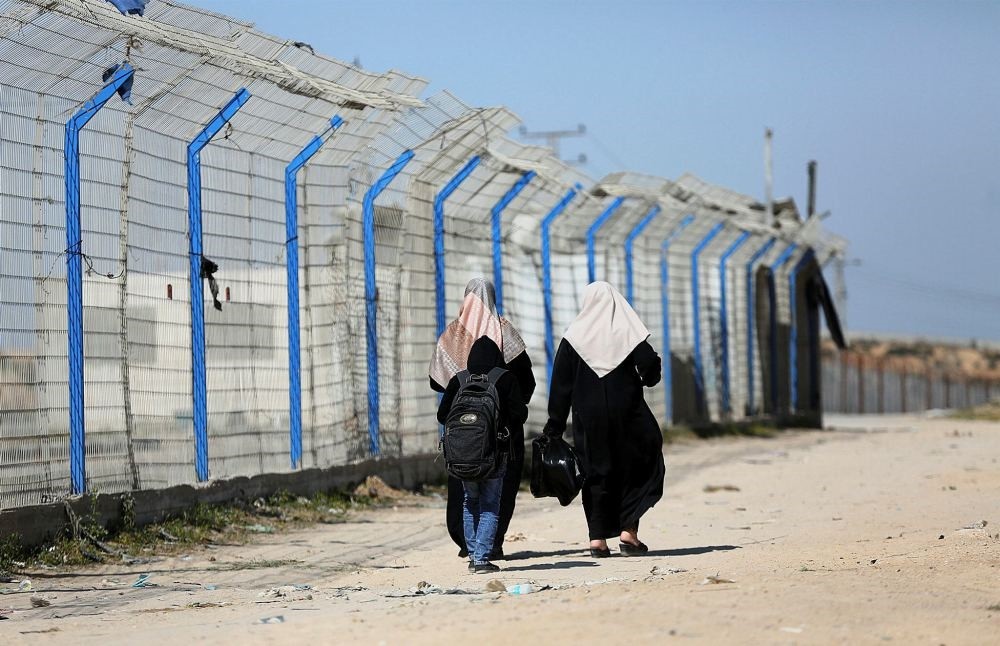 Palestinian women living near Erez crossing point walk near the border after its closure from the Palestinian side in the town of Beit Hanun in the northern Gaza Strip, March 26.
by Compiled from Wire Services Apr 04, 2017 12:00 am

Israel is blocking rights activists' access to and from the Gaza Strip, hampering their work in the Palestinian enclave, the Human Rights Watch (HRW) said on Monday.

In a 47-page report, the organization accused Israel of "systematically" preventing its researchers from visiting Gaza since 2008, only granting them one exceptional permit last year.

The group also said Egypt has prevented it and London-based Amnesty International from entering Gaza from its territory since 2012.

HRW said it had only once received permission from Israel for foreign staff to enter Gaza since 2008.

"Neither Human Rights Watch nor Amnesty International has been able to get staff into Gaza via Egypt since 2012," HRW said.

The New York-based rights watchdog said access to the strip was important to look into allegations of abuses during the devastating 2014 war. The International Criminal Court's (ICC) chief prosecutor has opened an initial probe into alleged war crimes by both sides during the July-August 2014 conflict.

"If Israel wants the ICC prosecutor to take seriously its argument that its criminal investigations are adequate, a good first step would be to allow human rights researchers to bring relevant information to light," said HRW's Sari Bashi.

"Impeding the work of human rights groups raises questions not just about the willingness of Israel's military authorities to conduct genuine investigations, but also their ability to do so," Bashi added.

Israel and Egypt have imposed a blockade on Gaza, home to nearly 2 million people, since the Hamas group took over the territory in 2007. Israel and Hamas have fought three wars since then.

Israel has long accused HRW of being unfairly biased against it.

Last month, Israel refused to grant a work permit to the New York group's regional director, though it later allowed him to visit the country as a tourist.

The Israeli military body that deals with Israel's border with the Gaza Strip denied a report that claims human rights workers are being barred entry to the occupied region.

"We coordinate the crossing of many human rights organizations, including Doctors Without Borders (MSF), in addition to more than 1,000 people daily," said Israel's Coordinator of Government Activities in the (Palestinian) Territories (COGAT) in a statement.

In 2014, Israel launched a devastating 51-day military onslaught on Gaza in which more than 2,300 Palestinians were killed and thousands injured.

According to Israeli figures, 68 Israeli soldiers and five civilians were killed in the conflict while 2,522 Israelis, including 740 soldiers, were injured.
RELATED TOPICS