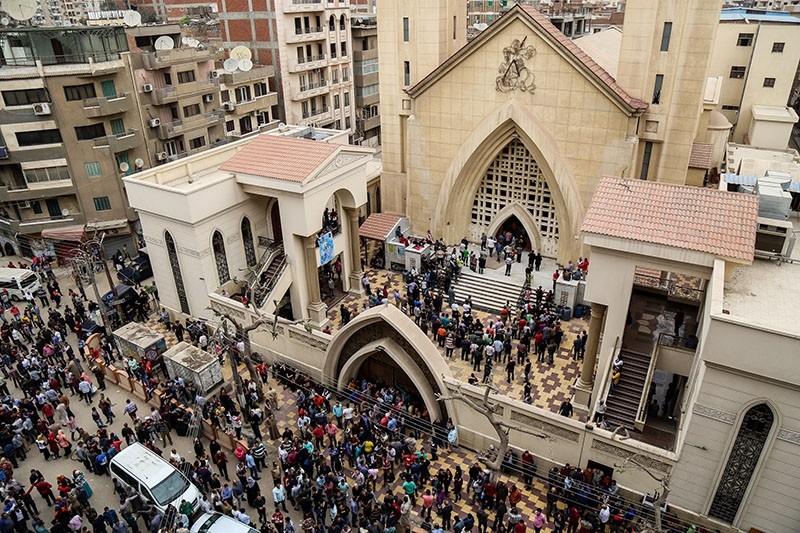 At least 40 people have been killed and more than 130 others were injured in separate bomb attacks on Sunday targeting two churches in northern Egypt belonging to the country's Coptic conmmunity in the deadliest attacks on the country's Christian minority in recent memory.

The Daesh terror group has claimed responsibility both bombings of Egyptian churches.

"Daesh squads carried out the attacks on two churches in Tanta and Alexandria," said the group's self-styled Amaq news agency in a statement published on social media accounts.

The first blast took place during a Palm Sunday mass at the Mar Girgis Coptic Church in the Nile Delta city of Tanta about 120 kilometres (75 miles) from Cairo. At least 27 people were killed and 70 thers were injured in the attack.

Images broadcast by private television stations showed bloodstains smearing the whitewashed walls of the church in Tanta next to shredded wooden benches.

"The explosion took place in the front rows, near the altar, during the mass," General Tarek Atiya, the deputy to Egypt's interior minister in charge of relations with the media, told AFP.

"I heard the blast and came running. I found people torn up... some people, only half of their bodies remained," said Nabil Nader, who lives in front of the Tanta church.

Meanwhile, a second explosion outside a Saint Mark church in the Egyptian coastal city of Alexandria, killing at least 13 and wounding dozens more.

Egypt's interior ministry has confirmed that a suicide bomber was behind the blast at the Alexandria church.

The bomber tried to storm the church where Coptic Pope Tawadros II was leading a Palm Sunday service but blew himself up when police prevented him from entering, the ministry said in a statement.

A Coptic Church official said Tawadros had left the church before the blast.

Palm Sunday is a Christian feast commemorating the entry of Jesus Christ into Jerusalem.

In a written statement after Sunday's attack, Hollande says "one more time, Egypt is hit by terrorists who want to destroy its unity and its diversity."

Turkey's Foreign Ministry Sunday condemned the deadly bomb attack in a written statement saying, "We strongly condemn the atrocious terrorist attack in a church in the city of Tanta that resulted in many deaths and injuries."

The statement also conveyed condolences to "the bereaved families and the entire Egyptian nation".

Pope Francis, who planned to visit Egypt in the coming weeks, condemned the deadly church blast during Palm Sunday Mass, offering his "profound condolences" to Pope Tawadros II, the head of the Coptic Orthodox Church, and his "beloved Egyptian nation."

The attacks in Tanta and in Alexandria were the latest in a series of assaults on Egypt's Christian minority, which makes up around 10 percent of the country's 90 million population and has been repeatedly targeted by terrorist groups.

In December, a bomb blast struck a church in central Cairo, which killed more than 25 people and injured scores.

A spate of terrorist-linked attacks in Egypt's restive Sinai Peninsula, including the murder of a Copt in the city of El Arish whose house was also burned, have led some Coptic families to flee their homes. About 250 Christians took refuge in the Suez Canal city of Ismailiya after Daesh released a video in February calling for attacks on the religious minority.