Lion and bear rescued from Mosul zoo under Daesh threat 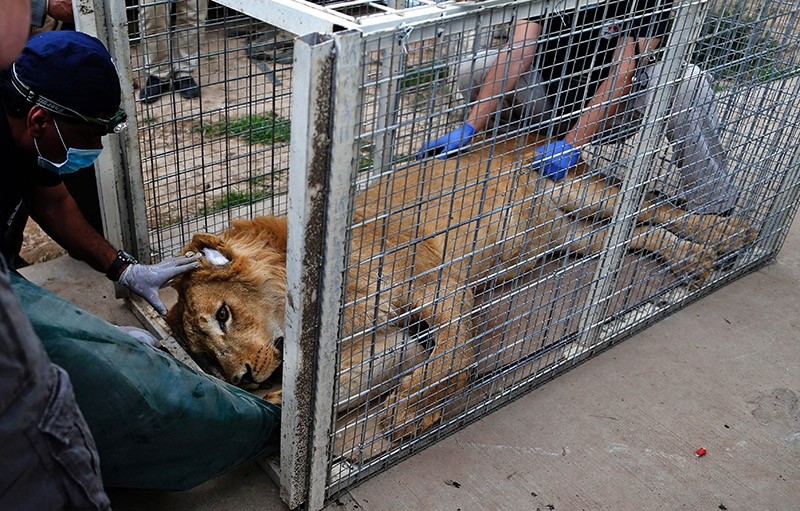 Simba the lion and Lula the bear, the last two animals living in poor conditions in a Mosul zoo, have been successfully saved by a charity organization.

The ​Montazah al-Morour zoo in eastern Mosul had been operated by a private company that left the animals to their fate when the city, located in northern Iraq, came under attack by Daesh militants. The bear and lion were found in February living in dirty and desolate conditions.

The charity organization, Four Paws International, carried out the rescue operation after it contacted the Iraqi government in order to obtain the necessary permits to evacuate the animals. An earlier rescue operation failed in late March when the lorry carrying the animals became stuck at a checkpoint.

Simba's state of health worsened as the lorry waited at the checkpoint for nine days and the animals had to be returned to the zoo. Simba and Lula have been negatively affected by their dire living conditions; Simba has a joint disorder and respiratory problems while Lula suffers from pneumonia.

The animals could finally be transferred to the nearby city of Irbil Monday, at which point they were flown to Jordan. The pair will now be able to start their new lives in a Jordanian zoo. Amir Khalil, the vet leading the rescue operation, said that he was relieved, adding, "From now on, they won't have to be part of this war."

After 100 days of combat, Iraqi forces recaptured the east of Mosul at the end of January, however the battle is ongoing in the west of the city. Some 1,600 civilians were killed our wounded during the fighting to recapture the east end of the city.