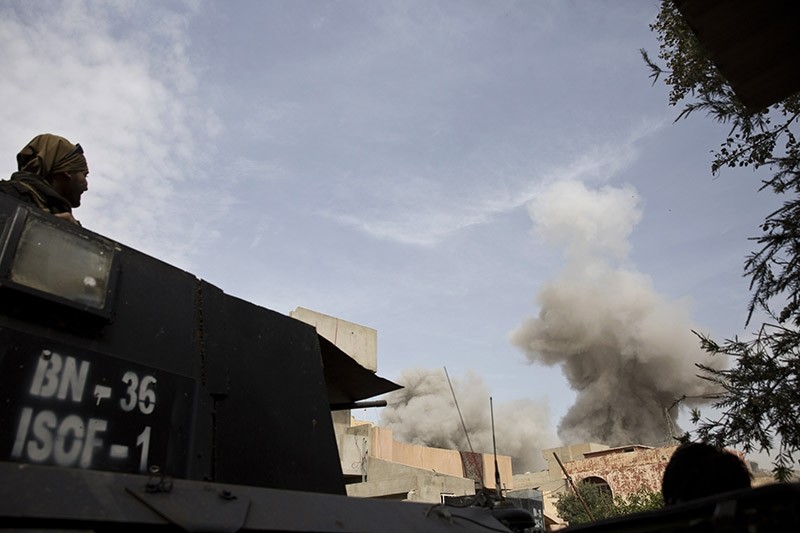 An Iraqi special forces soldier watches the plume of smoke from a coalition airstrike on a car bomb as troops move from the Yarmouk neighborhood to take another district from Daesh control in Mosul, Iraq, Wednesday, April 12, 2017. (AP Photo)
by Anadolu Agency Apr 16, 2017 12:00 am

Scores of civilians were killed this week in suspected U.S.-led coalition airstrikes in western Mosul, now the subject of a major offensive to oust Daesh militants from the area, according to a local Iraqi NGO.

In a Sunday statement, the Iraqi Observatory for Human Rights said an airstrike targeted a house in Al-Yarmouk district in western Mosul on April 10.

"The house was struck after a Daesh militant, who was on the rooftop, had escaped," the statement quoted Laith al-Rashidi, a displaced resident from Mosul, as saying.

He said that around 30 people had been killed in the attack.

The NGO said another coalition raid targeted a house where a 42-member family was living in Bab Sinjar district in western Mosul on April 15.

The rights group cited local residents, who said that most family members were believed to have been killed in the attack.

The NGO said another airstrike struck a two-floor house in the city's western side on April 15, but there was no information about casualties.

The Observatory called on the Iraqi army and allies "to abide by international humanitarian law and take the necessary steps to reduce the danger of Daesh on the safety of civilians".

It went on to call on the U.S.-led coalition "to give priority to the safety of civilians while carrying out airstrikes against Daesh".

Civilian houses occasionally come under attacks by coalition warplanes taking part in an Iraqi offensive aimed to recapture Mosul from Daesh terrorist group, which overran the city in 2014.