Annexation of Kirkuk by KRG may lead to a new conflict, experts say 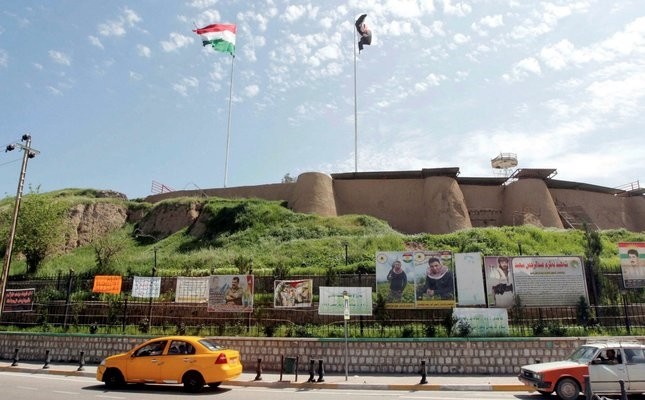 After the hoisting of the KRG flag in Kirkuk, the already troubled region is about to face a new problem as Kirkuk's contested position could pave the way for new ethnic and sectarian splits, experts say

In the already troubled Middle East, which is still reeling from endless wars in Syria and Yemen, the emergence of terror groups like Daesh and the PKK's Syrian offshoot the Democratic Union Party (PYD) along with unstable relations between neighboring countries like Israel and Lebanon, a previously frozen problem was brought to the agenda after the hoisting of the Kurdistan Regional Government's (KRG) flag in Kirkuk, Iraq last month. While the incident is unsurprising given the fact that the KRG's intention to annex Kirkuk is not a concealed fact, the timing itself came as a big surprise.

The crisis comes at a time when the KRG has declared a referendum will be held this year under the observance of the U.N. and the central Iraqi government has not gained any remarkable success against Daesh without the support of the KRG's Peshmerga. While the Iraqi central government seemed to address the issue imperturbably, Iran and Turkey said it was not acceptable and would lead to a new crisis. Since then, the Turkmen population took to the streets, several official statements were made and the KRG said a referendum would be held for the annexation of Kirkuk. KRG representatives, remaining silent on Turkish and Iranian comments, audaciously responded to Iraqi Prime Minister Haider al-Abadi's statements condemning Kirkuk Governor Najmaldin Karim said last week saying, "If they [Baghdad] find it unconstitutional, they can go to the court of the Federal Judiciary Authority to appeal the decision."

Still, it is a question of why Kirkuk matters so much and why both Turkey and Iran, having conflicting interests in the region, oppose the decision. Primarily, the historic city has a strategic location and is home to Iraq's largest oil fields. Posing a dispute between Baghdad and Irbil, the share of the oil revenue is considered to be the major reason for KRG's precipitous move to declare Kirkuk as coming under its section. The central government and KRG were in dispute over the portion of the revenue to be allocated for KRG's treason. While Irbil was eager to sell the oil via Turkey to the world markets, Baghdad has made obstacles and even stopped the pumping of oil a few times. The oil facility, which can pump as much as 150,000 barrels per day according to Iraq's state-run North Oil Company, 350,000 according to the KRG and have 8.7 billion barrels reserve according to the U.S. Energy Department, has become a matter of internal conflict in the KRG. Also "President Massoud Barzani, based in the capital of Erbil, began independent exports of oil from Kirkuk in 2014 but cut a deal with Baghdad last year to equally split the revenues. The deal has been opposed by the Patriotic Union of Kurdistan (PUK), which is dominant in the area of Kirkuk and is the historic adversary of Barzani's Irbil-based ruling Kurdistan Democratic Party (KDP)," Reuters reported last month.

The second reason, making the Kirkuk issue very sensitive is the fact that the city accommodates Kurds, Turkmens and Arabs. The Iraqi constitution, prepared under the domination of the U.S., had foreseen a referendum in 2007 to designate Kirkuk's status, after the Kurds and Turkmens, who were forcibly displaced from the era by toppled and executed President Saddam Hussein, returned to their homeland. Yet, the referendum has not been held and its statue has remained vague.

Şaban Kardaş, head of Ankara-based Center for Middle Eastern Strategic Studies, said KRG, and especially the PUK was trying to open Pandora's box and would pave the way for a new instability in the country. "Benefitting from the current chaos and trying to annex the city without a consensus among other actors like local Arabs and Turkmens the will spread to other contested areas and lead to new fights." Finding Turkey's position sensible, he said "Turkey opposes a fait accompli and asks the KRG not to touch the problem until an inclusive solution is found." Underlining that the PKK exists in Kirkuk, he said a post-Daesh process might lead to new breaking points and intra-fights. He foresaw that even Peshmerga and the Iranian-backed radical Shiite military group Hashdi Shaabi would face each other. Bilgay Duman, a senior researcher at ORSAM also wrote two weeks ago that "the developments in Kurdish domestic politics, the KRG effort to enlarge after Daesh, the position of the Iraqi central government, the increase of the PKK's activities in Kirkuk, the existence of Hashdi Shaabi, and Turkish-Iranian competition in the regional context took the level of contention to the top," to explain the multi-dimensional and overlapping factors laying behind the crisis.

In Turkey there is sensitivity with regard to the Turkmens and as a result both the government and the nationalists uttered concerns toward the exclusion of the persecuted minority. Yet, Turkey has improved its relations with the KRG over the course of the last decade, centralizing the oil sale and large volumes of trade. On the other hand, Iran's discontent is based on the fact that its influence will be narrowed in Iraq both due to the oil revenue issue and to the fact that a considerable portion of Turkmens are Shiite and heavily under Iranian influence. Stressing the fact that sect-based identities come before ethnicity, Galip Dalay, the director of the Istanbul-based Al Sharq Forum, said Turkey should follow a careful policy. Stating that Turkey and the KRG had improved their relations, he said Turkey's position to preserve the status quo was understandable but should be open to change. He also said "the KRG does not want to lose Daesh leverage against the world and aims to benefit from the current situation." He added "The KRG believes there will be no opposition from the West and is aware that Baghdad speaks out just with Iran's support."

Erşat Salihi, a member of Iraq's parliament and leader of the Iraqi Turkmen Front (ITF), who spoke to Daily Sabah two weeks ago described the current situation "like a powder keg ready to explode," adding, "Turkmens are preventing it from exploding." Calling the referendum decision to annex the city illegal, he said, "Kirkuk is a fragile region; unilateral rule is unacceptable. The decision is invalid as it was made while Turkmens and Arabs were boycotting the city council."

The moves by the regional actors and the domestic situation of Iraq will show the next steps to be taken regarding Kirkuk's position. Despite the fact that Turkey's relations with the Barzani administration are better than those of the central government, Ankara does not seek to deal with any problem that could lead to an array of renewed clashes.