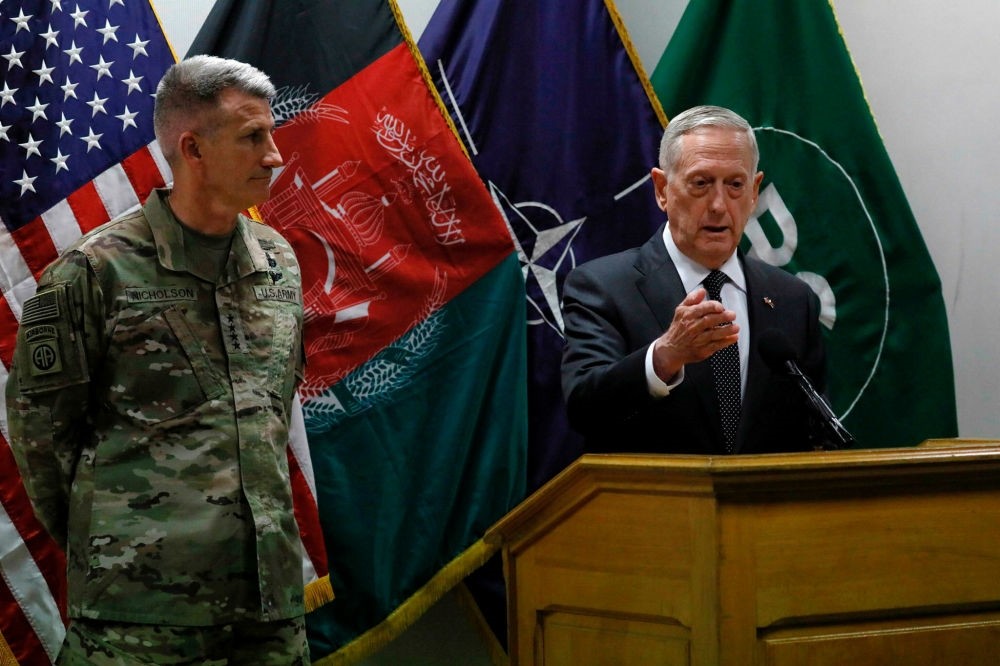 U.S. Defense Secretary Jim Mattis arrived in Afghanistan on an unannounced visit, hours after his Afghan counterpart resigned over a deadly Taliban attack that triggered anger and left the embattled army in disarray

Following a Taliban attack over the weekend that struck a northern army base, killing more than 100 military and other personnel, U.S. Defense Secretary Jim Mattis arrived in Afghanistan yesterday in order to try to construct President Trump's strategy for the war-torn country.

His arrival coincided with an announcement that his Afghan counterpart, Defense Minister Abdullah Habibi, and the Afghan army chief of staff had resigned after the Talibana attack. President Ashraf Ghani accepted the resignations of the army chief of staff and the country's defense minister, according to a statement from the president's office. It was not immediately clear who would replace Defense Minister Abdullah Habibi and Army Chief of Staff Qadam Shah Shahim.

The attack — the biggest ever by the Taliban on a military base in Afghanistan — involved multiple gunmen and suicide bombers in army uniforms who penetrated the compound of the 209th Corps of the Afghan National Army in northern Balkh province on Friday, killing and wounding scores.

U.S. officials acknowledge that Afghanistan has rarely in recent years been considered a priority by decision-makers, who have instead been consumed by Syria, Iraq and, increasingly, North Korea. But there are signs the administration of new President Donald Trump is making progress in crafting a policy for Afghanistan.

Trump's National Security Adviser H.R. McMaster visited Afghanistan this month, becoming the first senior official from the new administration to do so.

The attack came just over a week after the United States dropped a 22,000 pound bomb, known as the "mother of all bombs", against a series of Daesh caves and tunnels near the border with Pakistan.

U.S. officials say they were surprised by the level of attention that particular bomb got, since it does little to change the overall situation ground where the larger threat remained the Taliban, not Daesh.

The Afghan army is preparing for what is expected to be a year of hard fighting against Taliban militants, who now control or contest more than 40 percent of the country. Nearly 9,000 U.S. troops remain in Afghanistan, in addition to thousands of international coalition forces.

General John Nicholson, the top U.S. commander in Afghanistan, recently told a Congressional hearing that he needed several thousand more international troops in order to break a stalemate in the long war with Taliban insurgents. U.S. officials say that Nicholson's request was making its way through the chain of command. Conversations, however, according to current and former officials, were revolving around 3,000 to 5,000 additional troops.

One official said that there was an emphasis on creating a strategy that was not tied to artificial deadlines. Former President Barack Obama had wanted to reduce the number of U.S. troops in Afghanistan before he left office.
Last Update: Apr 25, 2017 1:03 am
RELATED TOPICS