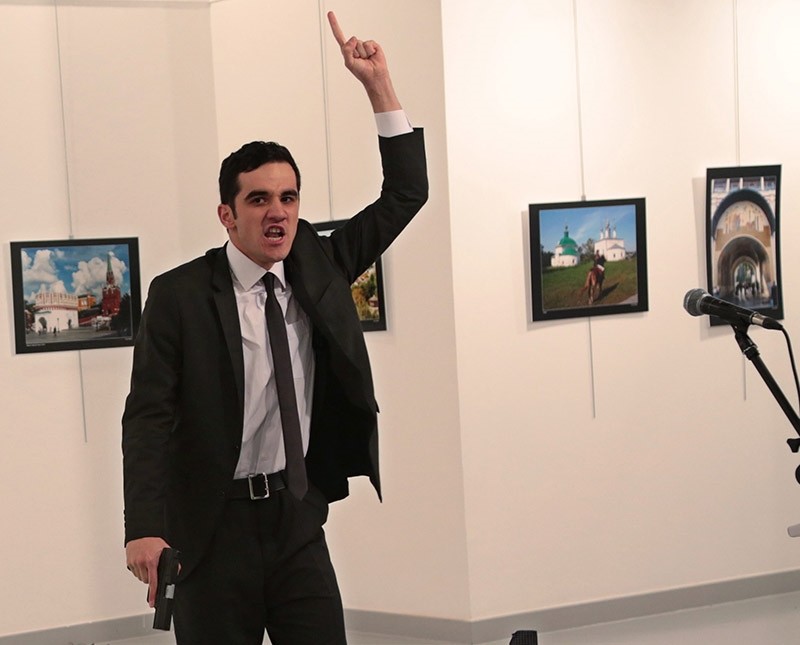 Mevlüt Mert Altıntaş, the off-duty police officer who killed Russian Ambassador Andrey Karlov on December 19 last year, was discovered on the lists of the Gülenist Terror Group (FETÖ). Altıntaş's name, who deliberately put Turkish-Russian relations at risk just as they were improving, was found in FETÖ-documents pertaining to "secret imams," allegedly together with a note describing him as "one of us."

Altıntaş's name is mentioned in a 20,000-word file stored on a micro card that was seized at the house of an alleged FETÖ-member during operations which took place in the last week of April, reports said. The document known as FETÖ's "police archive" reportedly mentioned him as "one of us" and also disclosed the so-called "secret imams" Altıntaş had to report to as well as the persons from inside the organization who mentored Altıntaş.

The "police archive" classified Turkish police officers according to their closeness or hostility to FETÖ. The report lists 2,500 high-ranking police officers as "enemies," out of which 55 were said to be "vicious enemies." Officers who were perceived as a threat to FETÖ were allegedly labeled with F-codes, while policemen who served FETÖ were labeled with A- and B-codes, ranging from A-5 and A-4 for "full obedience", with B-5 being awarded to those with some "weak points."

The operations during which the card was reportedly seized were carried out on April 26. In Ankara alone, 8,500 police officers were deployed, cooperating with Turkey's National Intelligence Organization (MIT). The raids concentrated on the so-called "secret imams" of the terrorist group and aimed to expose the structure of the organization within the police forces. Some 1,120 individuals were detained countrywide for suspected ties to FETÖ.

Additional information stored on the card consists in records of "charitable acts" by FETÖ-associates: Police officers who were members of the terrorist group had to contribute TL110 monthly, high-ranking security officials TL150 and chief officers of police graduates from college had to pay TL230. The terrorist organization, which until December had been able to collect TL13 million per month, used the funds to offer support to FETÖ-members in police custody and to their families. Only 7 percent of the content of the two-terabyte card has been decoded so far by law-enforcement authorities, which makes it probable that other crucial information will also surface.

FETÖ, which is the No. 1 suspect for the July 15 military coup attempt, had aimed at further infiltration of police forces and political parties after Dec. 17. According to the new information obtained by recent raids, all superiors and police officers of the Branch Office for Appointments were FETÖ-linked. These have been removed from office completely and 9,103 police officers have been suspended as part of the latest operations.