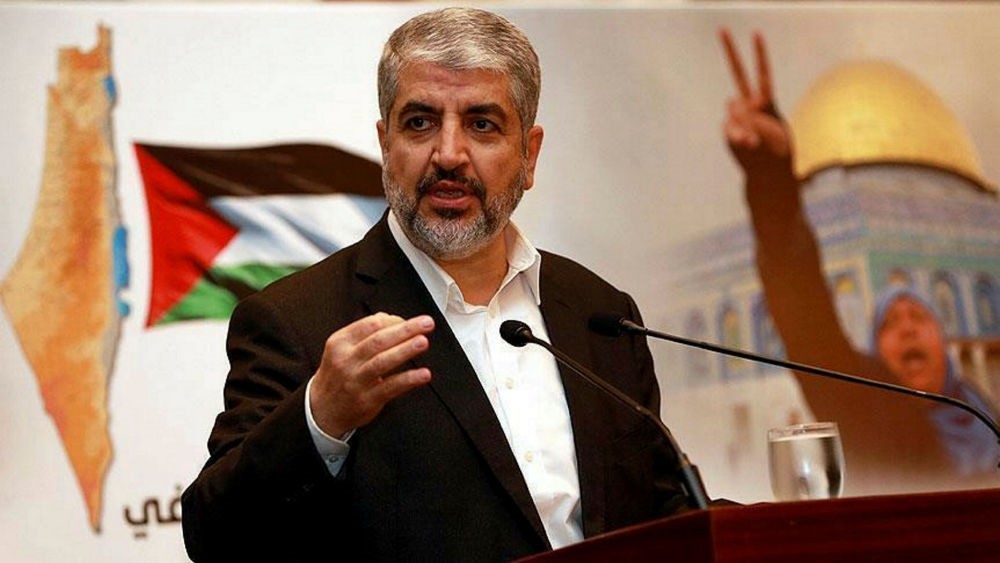 The exiled ruler of Hamas Khaled Mashaal presents the new manifesto in Doha, Qatar.
by Yusuf Selman İnanç May 04, 2017 12:00 am

Palestine's Hamas has declared a new party manifesto that signals reconciliation with Fatah, disavowing itself from the Muslim Brotherhood and separating Jews from Zionists. In doing so, the group is taking steps to gain legitimacy as it seeks allies against possible terror threats

The Palestinian Hamas group declared its new program on Monday in Qatar's capital Doha, disavowing itself from the Muslim Brotherhood, distancing itself from aims of destroying Israel and accepting the 1967 borders of the Palestinian state without referring to Israel's legitimate statehood.

Hamas also signaled its acceptance for a two-state solution through an alliance with its main rival the Fatah Party, as the reconciliation process was on the agenda in recent months.

Yet, it begs to question why the group required such a change at this time. The answer lies behind the political conjuncture of the region as well as attempts to penetrate the wall of international isolationism amid Hamas's hopes of becoming a legitimate actor in politics.

Khaled Mashaal, the exiled ruler of Hamas, was present for the program despite his plans to step down at the end of this month.

An Associated Press report summarized the main points of the Hamas declaration, saying that the new program, "For the first time raises the possibility of establishing a Palestinian state in the West Bank, the Gaza Strip and east Jerusalem, territories which Israel captured in 1967."

It goes on to say that the declaration "stresses that Hamas bears no enmity towards the Jews. The group says its fight is with those who occupy Palestinian lands, regardless of religion."

There are several reasons for the release of Hamas's new program; namely, its attempt to better relations with Egypt for combatting the Daesh threat in north Sinai, aims to decrease internal pressure coming from Palestinian President Mahmoud Abbas who, according to an AP report, "has warned that he will exert more financial pressure; presumably in the form of cutbacks on wage payments and aid to Gaza to force Hamas to cede ground there," as well as pressure from the international community.

According to Hamas's newly released political document, "The establishment of 'Israel' is entirely illegal and contravenes the inalienable rights of the Palestinian people and goes against their will and the will of the ummah, or global community of Muslims; it is also in violation of human rights that are guaranteed by international conventions; the foremost among them being the right to self-determination..."

The document goes on to say that, "There shall be no recognition of the legitimacy of the Zionist entity. Whatever has befallen the lands of P

alestine in terms of occupation, settlement building, Judaization or changes to [the Palestinian state's] features or falsification of facts is illegitimate. Rights never lapse... Hamas believes that no part of the land of Palestine shall be compromised or conceded; irrespective of the causes, the circumstances or the pressures and no matter how long the occupation lasts. Hamas rejects any alternative to the full and complete liberation of Palestine."

"The Zionist project is a racist, aggressive, colonial and expansionist project based on seizing the properties of others," it continues, asserting that, "It is hostile to the Palestinian people and to their aspirations of freedom, liberation, return and self-determination."

The verbiage used here is an attempt by Hamas to legitimize its struggle against Israel in the international arena by clearly saying that Israel is the enemy of the Palestinians; not the Jews.

The document states that, "A real state of Palestine is a state that has been liberated. There is no alternative to a fully sovereign Palestinian state on the entirety of national Palestinian soil, with Jerusalem as its capital... Hamas believes in, and adheres to, managing its Palestinian relations on the basis of pluralism, democracy, national partnership, acceptance of the other and the adoption of dialogue. The aim is to bolster the unity of ranks and joint action for the purpose of accomplishing national goals and fulfilling the aspirations of the Palestinian people."

This excerpt from the document indicates Hamas's efforts to break the internal pressure while embracing its main political rival.

In addition to the aforementioned reasons for the document's release, Hamas is also responding to pressure from Egypt, which is experiencing a Daesh insurgency in North Sinai.

Immediately following the military coup in Egypt in 2013, which saw Egypt's first democratically elected president Mohammed Morsi overthrown by the now incumbent president former Gen. Abdel Fattah el-Sissi, speculation began swirling regarding the potential demise of the Muslim Brotherhood, Morsi's ally and the mother organization of Hamas, which would shake up the role of moderate groups and lead to the rise of extremist movements.

However, the center of extremism remained stuck in North Sinai, not Gaza, crafting an opportunity for Hamas to survive. Despite brutal Israeli attacks and the isolation of Gaza by Egypt through the closing the Rafah Gate border crossing, Hamas did not collapse and has overcome the attempts of Salafi groups to rebel as well as Daesh's attempts to recruit followers. The group has been preparing to restore relations with Egypt. Egyptian and Israeli media outlets reported last year that a purge of Salafis in Gaza was carried out by Hamas in coordination with Egyptian intelligence.

In February, deputy Hamas leader Ismail Haniyeh said that the group's relationship with Egypt had turned a new leaf, saying that Hamas is interested in maintaining close contacts with Egypt and intends to remove all causes of concern now overshadowing Egyptian leadership; especially in regards to security.

While Egypt has accused Hamas of forming alliances with extremist groups in Sinai, now the two are seeking levels of cooperation against Daesh and its affiliates.

The Egyptian government also accused Hamas of cooperating with the outlawed Muslim Brotherhood, with one senior Egyptian security source telling reporters in February that, "We want cooperation in controlling the borders and tunnels, the handover of the perpetrators of armed attacks and a boycott of the Muslim Brotherhood. They want the [border] crossing to be opened and to conduct more trade. This has actually begun, albeit partially. We hope it will continue."

In this way, Hamas also seeks to develop trade in Gaza, which has been encircled and embargoed by Egypt and Israel. Thousands of illegal tunnels have been closed by Egypt amid claims that the tunnels were used by militants. Yet, the local media has reported that Egyptian officials recently facilitated the transportation of construction and raw materials to Gaza.

"The desire to secure the area and restore a semblance of normality is as strong for Egypt, which wants to bring back the foreign investors who fled after 2011, as it is for Gazans. Egyptians who organized the Palestinian conferences (including Elazb al-Tayeb Taher, a writer on Arab affairs at the state-owned Al-Ahram newspaper) suggested the border might be reopened for trade for 10 or 15 days at a time, rather than a few days every six weeks at present, to build trust. However, the ultimate aim is more ambitious, seeking a free trade area and an industrial zone on the Egyptian side to facilitate commerce while allowing Gazans to travel abroad and creating jobs for

those who might otherwise join the militants," Egyptian officials said according to Reuters.
Last Update: May 04, 2017 1:48 am
RELATED TOPICS