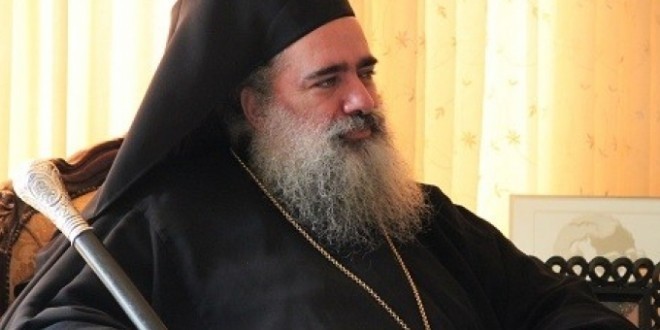 A leading Christian cleric in Jerusalem announced he will join a hunger strike in support of 1,500 Palestinian prisoners who are in the 21st day of a mass hunger strike for better conditions in Israeli prisons.

The Greek Orthodox archbishop of Sebastia, Atallah (Theodosios) Hanna said on Sunday that he supports the prisoners' struggle to make their voice heard, adding their demands are justified.

"Palestinians deserve to live freely in their own land, the main aim is the prisoners' liberation," Hanna said.

The strike, led by senior Palestinian leader Marwan Barghouti, has also prompted protests in wider Palestinian society and the organizing committee behind the strike has called for a series of protests in the coming week, including clearing all shops of Israeli goods on Wednesday as an act of boycott and a general strike the following day.

Scores of Palestinians have continued to stage rallies as many gathered outside the office of the International Committee of the Red Cross Sunday in the Gaza Strip in support of hunger-striking prisoners in Israeli jails.

"We came today to show solidarity with our imprisoned sons in Israeli jails," Neama Haddad, the mother of one of the prisoners, told Anadolu Agency. "The prisoners are suffering from racist practices against them by prison authorities," she added.

Protesters carried pictures of prisoners with banners calling for international pressures to release the detainees. "We appeal to international organizations to act to free detainees from Israeli prisons," Haddad said.

Meanwhile, a group of Israeli doctors called on colleagues both in Israel and internationally to reject Israeli plans to force-feed Palestinian prisoners.

The hunger strike follow-up committee also warned that if any hunger striker was force-fed, all prisons would turn into confrontation zones and would clashes would erupt. The prisoners seek improved conditions, including more family visits.

Israel holds about 6,500 Palestinians on charges related to the Israeli-Palestinian conflict.