Trump lands in Saudi Arabia on his first trip abroad 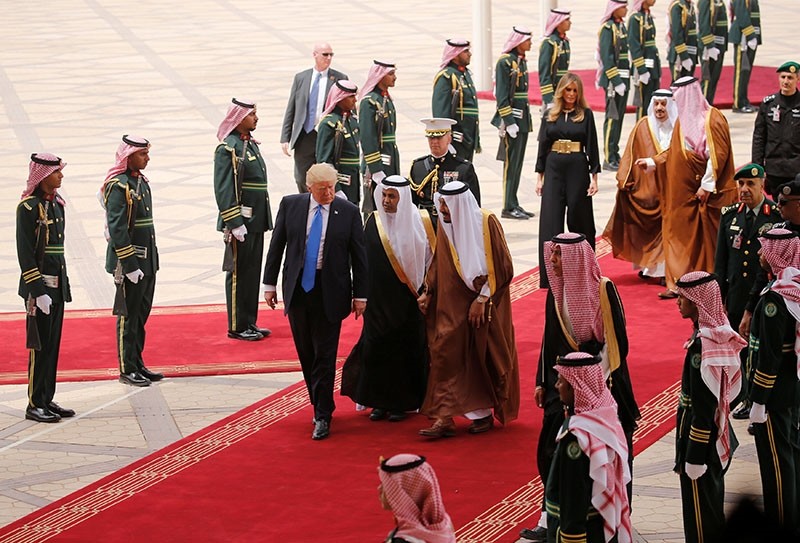 President Donald Trump opened his first trip abroad since taking office, touching down Saturday in Saudi Arabia for a visit aimed at building stronger partnerships to combat terrorism in the region and moving past the controversies engulfing his young administration.

Trump flew to Riyadh overnight on Air Force One. He's the only American president to make Saudi Arabia, or any majority Muslim country, his first stop overseas as president — a scheduling choice designed in part to show respect to the region after months of harsh anti-Muslim campaign rhetoric.

The president's stop in Saudi Arabia kicks off an ambitious international debut. After two days of meetings in Riyadh, Trump will travel to Israel, have an audience with Pope Francis at the Vatican, and meet with allies at a NATO summit in Brussels and the Group of 7 wealthy nations in Sicily.

For a president who campaigned on an "America First" platform, the trip is a crucial moment for U.S. allies to size up his commitment to decades-long partnerships.

White House officials hope the trip marks an opportunity for Trump to recalibrate after one of the most difficult stretches of his young presidency. The White House badly bungled the president's stunning firing of FBI Director James Comey, who was overseeing the federal investigation into possible ties between Trump's campaign and Russia. On Wednesday, the Justice Department relented to calls from Democrats to name a special counsel, tapping former FBI chief Robert Mueller to lead the probe.

As Trump flew to Saudi Arabia, more reports stemming from the Russia investigation surfaced. The New York Times reported that Trump called Comey "a real nut job" while discussing the ongoing investigation with two Russian officials visiting the White House earlier this month. He also told them that firing Comey had "taken off" the "great pressure" he was feeling from the investigation, the Times reported.

Meanwhile, The Washington Post reported that an unidentified senior Trump adviser was being considered a "person of interest" in the law enforcement investigation. In addition, Comey agreed to testify at an open hearing of the Senate intelligence committee in the near future, the panel said.

Despite his domestic troubles, Trump was expected to get a warm reception in Saudi Arabia. The kingdom's ruling family grew deeply frustrated with former President Barack Obama's detente with Iran and his restrained approach to the conflict in Syria.

In a sweetener for Saudi Arabia, U.S. officials said the Trump administration plans to announce $110 billion in advanced military equipment sales and training to the kingdom during the president's trip. The package includes tanks, combat ships, missile defense systems, radar and communications and cybersecurity technology.

Trump will spend much of Saturday meeting with King Salman and other members of the royal family, culminating with a banquet dinner at the Murabba Palace. On Sunday, he'll hold meetings with more than 50 Arab and Muslim leaders heading converging on Riyadh for a regional summit focused largely on combating Daesh and other terrorist groups.

Trump dodged one potential land mine when Sudanese President Omar al-Bashir, who has been indicted on war crime and genocide charges, announced that he would not attend the summit for personal reasons.

The centerpiece of Trump's visit to Saudi Arabia will be a speech Sunday at the Arab-Islamic-American summit. White House aides view the address as a counter to Obama's 2009 speech to the Muslim world, which Trump advisers view as too apologetic for U.S. actions in the region.