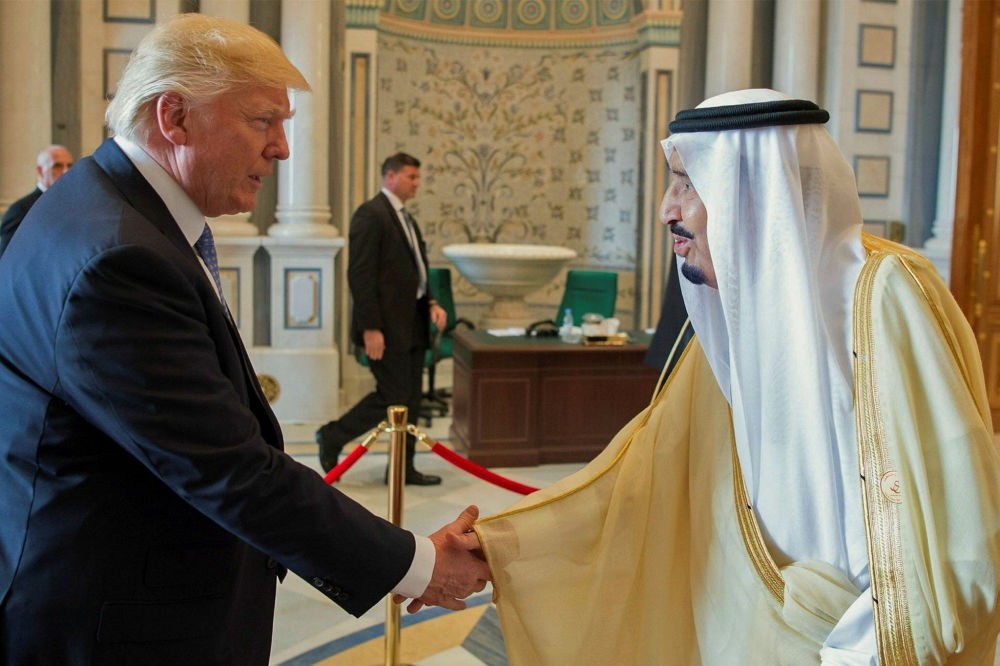 U.S. President Donald Trump and King Salman bin Abdulaziz al-Saud of Saudi Arabia shake hands at the opening session of the Gulf Cooperation Council summit (GCC), in Riyadh, Saudi Arabia, May 21.
by Compiled from Wire Services
May 23, 2017 12:00 am

The yawning gap between Tehran and Washington has grown even wider with U.S. President Trump's latest efforts to isolate Iran in the region, while bolstering cooperation with Saudi Arabia and other Gulf countries

The U.S. president signed a giant list of deals, worth a total of $380 billion, including $110 billion for weapons that will invariably find their way into the numerous conflicts of the region — including Syria, Yemen and Iraq — where Riyadh and Tehran often find themselves on opposing sides.

"Once again, by his repetitive and baseless claims about Iran, the American president ... tried to encourage the countries of the region to purchase more arms by spreading Iranophobia," Foreign Ministry spokesman Bahram Qassemi said, a day after President Trump ended a visit to Tehran's arch-foe Saudi Arabia, where arms deals worth almost $110 billion were signed.

He said the U.S. and its allies "should know that Iran is a democratic, stable and powerful country" and that it promoted "peace, good neighborliness, and the creation of a world opposed to violence and extremism."

Iran's foreign minister, Mohammad Javad Zarif, advised Trump to discuss how to avoid another Sept. 11 attack with the Saudi hosts of his first official visit abroad, Zarif wrote in an editorial published on Sunday.

Iran, which has been accused of exposing sectarian fault lines in the region, especially in Yemen, Syria and Iraq, tried to soften its rhetoric as Rouhani said there should be greater unity between Shiites and Sunnis and that they had coexisted side by side peacefully for hundreds of years. During the Barack Obama era, Iran enjoyed the opportunity to fill the vacuum in the Middle East after the White House abandoned its traditional allies, like Turkey and Saudi Arabia.

The Iranian president championed a nuclear deal with the United States and five other major powers in 2015 that led to the lifting of most sanctions against Iran last year in return for curbs on its nuclear program. Gulf Arab states expressed support for the deal, but also fears that the lifting of sanctions would enable Tehran to pursue destabilizing policies in the Middle East.