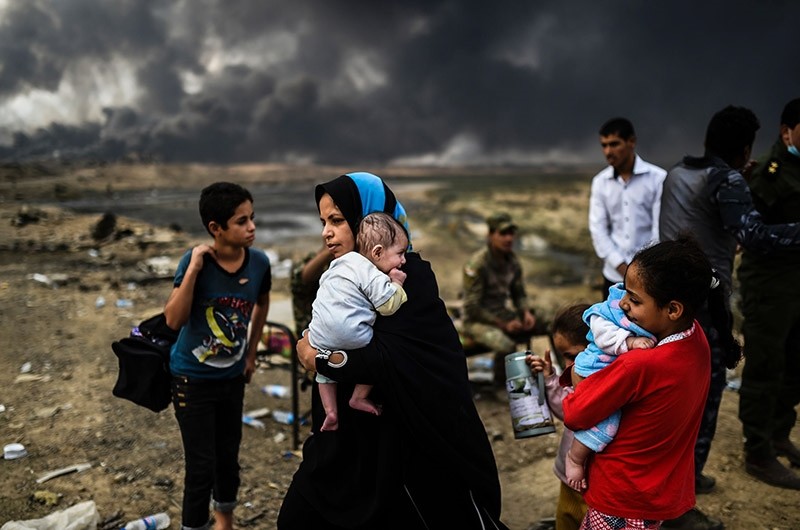 Iraqi families, who were displaced by the ongoing operation by Iraqi forces against Daesh terrorists to retake the city of Mosul, are seen gathering on an area near Qayyarah on October 24, 2016. (AFP Photo)
by Associated Press Jun 05, 2017 12:00 am

Mosul's children are bearing the brunt of the intensified fight between Iraqi government forces and the Daesh terrorist group in the city's western half, the United Nations children's agency warned on Monday.

Iraqi forces are in their last push to drive Daesh terrorists from the remaining pockets of territory they still hold in the Old City where narrow streets and a dense civilian population are complicating the fight.

The UNICEF Representative in Iraq, Peter Hawkins, said the agency is receiving "alarming reports" of civilians being killed, including children, with some caught in the crossfire while trying to flee.

Hawkins didn't give a specific number for killed children.

He estimated that 100,000 girls and boys are still in the IS-held Old City neighborhood and other areas, living under extremely dangerous conditions. He called on the warring parties to "protect the children and keep them out of harm's way at all times, in line with their obligations under humanitarian law."

"Children's lives are on the line. Children are being killed, injured and used as human shields. Children are experiencing and witnessing terrible violence that no human being should ever witness," he said in a statement. "In some cases, they have been forced to participate in the fighting and violence," he added.

Iraq launched last October a wide-scale military offensive to recapture Mosul and the surrounding areas, with various Iraqi military, police and paramilitary forces taking part in the operation. The city's eastern half was declared liberated in January, and the push for the city's western section, separated from the east by the Tigris River, began the following month.

Iraq's second-largest city, Mosul fell to Daesh in the summer of 2014 as the terrorists swept over much of the country's north and central areas.