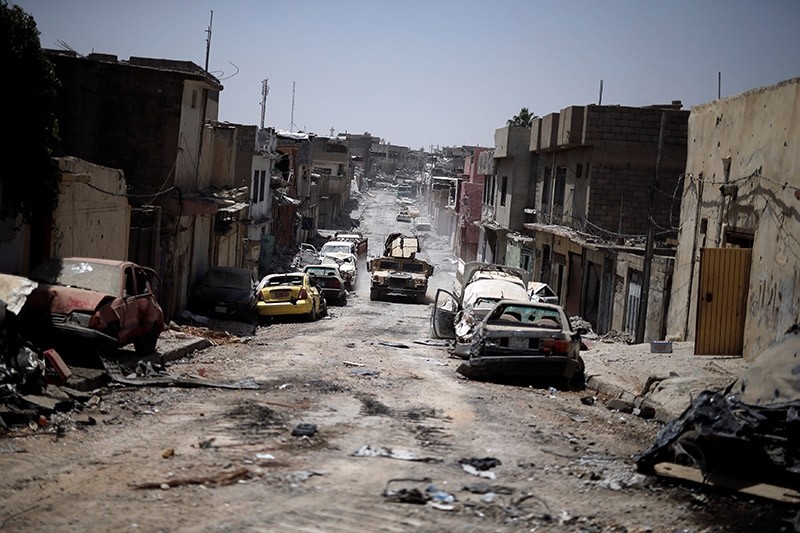 An Iraqi Army's 9th Armoured Division vehicle moves among destroyed cars and damaged buildings at the frontline at the al-Zanjili district in Mosul, Iraq June 10, 2017. (Reuters Photo)
by Daily Sabah Jun 10, 2017 12:00 am

The controversial munitions, which can be dropped as incendiary weapons, are generally used by western militaries as smoke screens, the Washington Post reported.

The chemicals inside the phosphorus shell react with the air before creating a white cloud, however if they come in contact with human flesh, the chemicals may harm or even kill by burning into the bone.

According to international humanitarian law, civilians must be protected from all military operations, especially when using chemical weapons. Human rights groups favor other weapons to be used during war, as white phosphorus could cause inhumane injuries.

The Washington Post reported Friday that U.S. Army Col. Ryan Dillon, who is a spokesperson for U.S.-led coalition activities in Iraq and Syria, did not want to confirm the incident, however underlined in an email that the U.S. military was using white phosphorus weapons "in accordance with the law of armed conflict for screening, obscuring, and marking in a way that fully considers the possible incidental effects on civilians and civilian structures."

The Human Rights Watch is currently trying to confirm the authenticity of the video the Washington Post said, implying that the weapons used in Raqqa looked similar to the munitions used last Saturday in Iraq's Mosul.