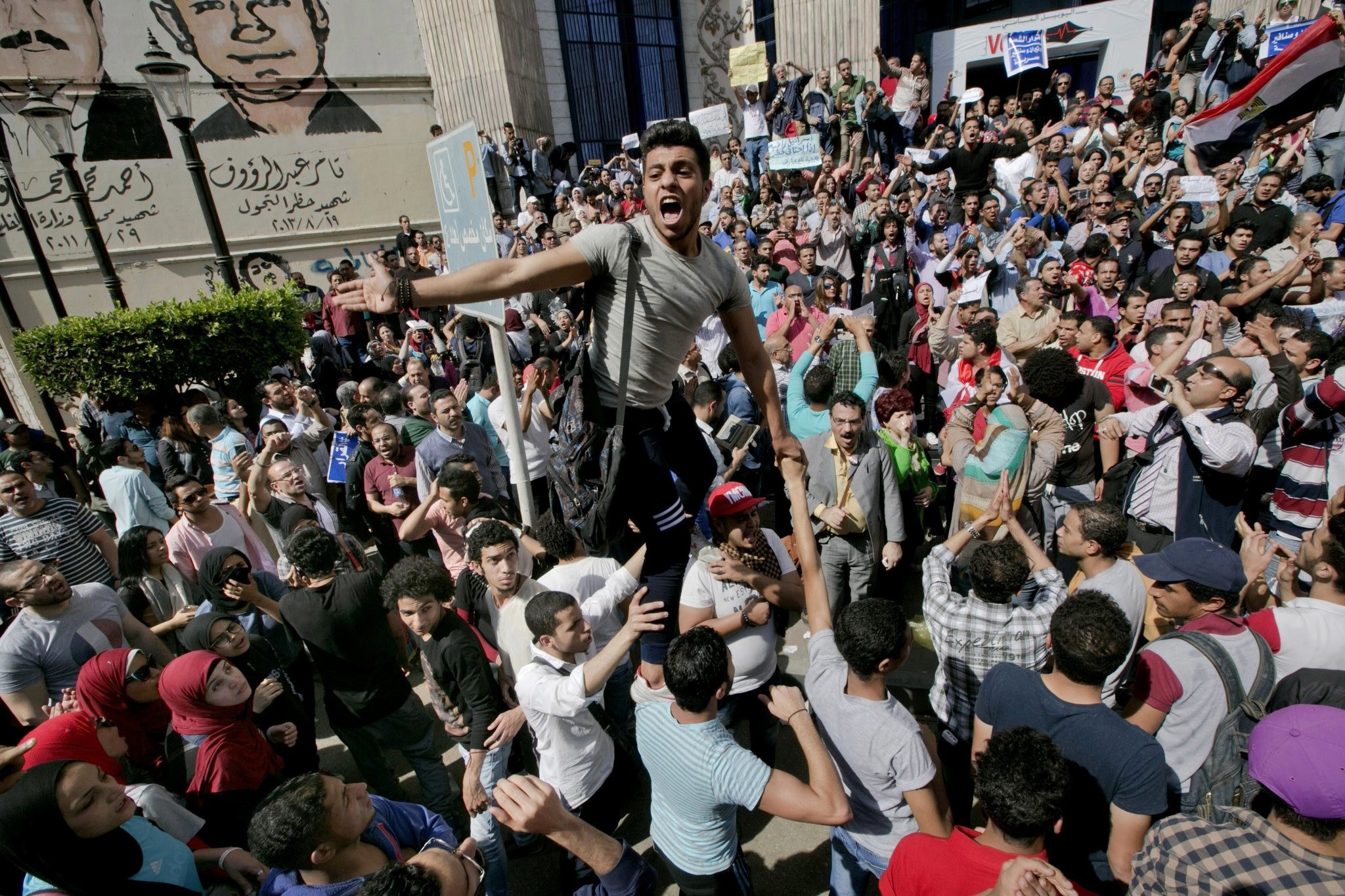 Egyptians shout slogans against President el-Sissi during a protest against the decision to hand over control of two strategic Red Sea islands to Saudi Arabia in front of the Press Syndicate, in Cairo, Egypt. (AP Photo)
by Associated Press Jun 11, 2017 12:00 am

In a raucous meeting, an Egyptian parliamentary committee on Sunday began reviewing a disputed 2016 agreement to hand control over two Red Sea islands to Saudi Arabia, a move critics say ignores a final ruling by a high court to annul the pact.

The meeting of the legislative and constitutional committee follows a January ruling by the High Administrative Court that upheld a lower court verdict, declaring the agreement unconstitutional and void.

Speaker Ali Abdel-Al, a staunch government supporter, struggled to keep order, with committee members arguing among themselves about whether reviewing the agreement was appropriate given the January court ruling. There were also arguments on whether media representatives should be allowed to stay in the chamber while the discussions were ongoing.

Media representatives stayed but there was no live television broadcast from the meeting as earlier promised by lawmakers and it took nearly an hour before the meeting got under way. However, arguments and shouting matches among lawmakers continued amid chaotic scenes.

"I have nothing to do with the ruling of any court of law," he said. "These rulings are the concern of the judiciary and they amount to nil," said the speaker who, in his struggle to keep order in the meeting, threatened to throw out lawmakers opposed to the review claiming they were trying to derail the process.

Egypt's government contends that the islands of Tiran and Sanafir at the mouth of the Gulf of Aqaba belonged to Saudi Arabia, which placed them in Cairo's custody in the 1950s for protection against possible Israeli attacks. Critics say surrendering them amounts to treason and claim it was linked to financial Saudi aid, a charge denied by authorities.

The agreement was announced during a high-profile visit to Cairo in April 2016 by Saudi King Salman during which the monarch announced a multibillion dollar package of investments and soft loans to Egypt.

The government's decision to take the April 2016 agreement to parliament came at a time when relations between Cairo and Riyadh had just emerged from months of tension over differences in approach to regional flashpoints like Syria and Yemen. Over the past two month, el-Sissi visited Saudi Arabia twice. Last week, the two regional heavyweights joined allies the United Arab Emirates and Bahrain in a coalition against Qatar, the tiny but energy-rich nation they accuse of supporting militant groups and being too close to Iran.

The government's intention to have parliament ratify the agreement became apparent when state media embraced the official line on the islands. The official MENA news agency, for example, has posted on its website a video of "historical" maps purporting to show the islands to be Saudi, along with quotations from el-Sissi and experts in support of handing them over to the Saudis.

"We don't sell our land to anyone and also we don't seize the land of others," el-Sissi said in the video.

The decision to cede control of the islands to the Saudis sparked street protests in April last year, the largest since el-Sissi took office in June 2014, and a parliament vote to ratify the deal is likely to lead to a fresh round of unrest and could set the legislative and judiciary on a collision course.

Critics of the agreement also contend that it violates the constitution, which bars the surrender of any territory.

"We have martyrs who gave their lives in defense of that territory. If the Saudis think they are theirs, then why now? And what's the price?" prominent novelist and lawmaker Youssef al-Qaeed said in comments published Sunday. "This is truly a calamity because no one, absolutely no one, has the right to surrender a grain of sand from Egypt's barren desert, no matter what the justifications are."