One child infected every minute in Yemen as cholera epidemic continues 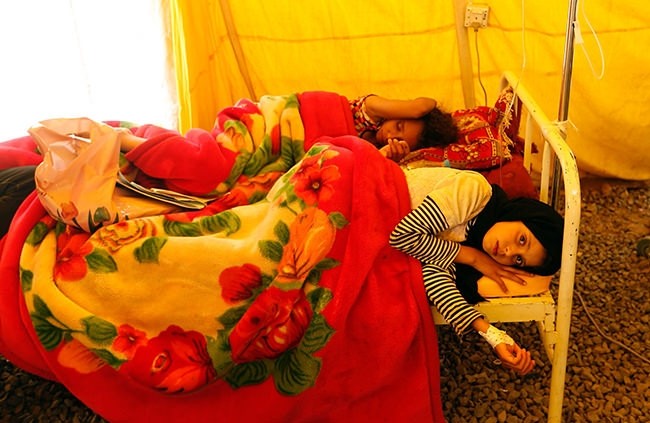 A cholera epidemic raging across Yemen is spiraling out of control, with around one child falling sick every minute, an aid agency warned on Wednesday.

Thousands of people could die in the coming months with up to 300,000 cases predicted, Save the Children said, adding that the infection rate had tripled in a fortnight.

Two years of civil war, near-famine conditions and a lack of access to clean water have exacerbated the spread of cholera - a diarrheal disease that can kill within hours.

The country's health system - already on its knees - is reeling with hospitals overwhelmed and quickly running out of medicines and intravenous fluids.

The U.N. children's agency UNICEF said more than 920 people had died from the disease since late April and more than 124,000 cases had been recorded – almost half of them children.

Grant Pritchard, Save the Children's representative in Yemen, called for an increase in emergency funding to tackle the epidemic.

"It's time for the world to take action before thousands of Yemeni boys and girls perish from an entirely preventable disease," he said in a statement.

"Disease, starvation and war are causing a perfect storm of disaster for Yemen's people. The region's poorest country is on the verge of total collapse, and children are dying because they're not able to access basic healthcare."

Yemen's civil war, pitting the Iran-allied Houthi group against a Western-backed Arab coalition led by Saudi Arabia, has left 19 million people needing humanitarian aid with many on the verge of famine.

More than 2 million children are acutely malnourished making them particularly vulnerable to cholera as their weakened systems are less able to fight off disease, Save the Children said.

Pritchard said restrictions on bringing aid and medical supplies into Yemen, including delays accessing Hodeidah port and the closure of Sanaa airport, were compounding difficulties in halting the epidemic.

Unaffordable transport is also making it hard for people to reach treatment.

One man told the charity he had been forced to seek help for his children in the capital Sanaa, more than 200 km (125 miles) from his home, because his local hospital was full. The trip had cost 35,000 Yemen rial ($140).

A nurse at a Sanaa cholera unit said there was one day when they had received more than 550 cases.

"Every hour we receive patients. We work here 24 hours. People come from all governorates across the country," the nurse added. "I have come across many sad stories."