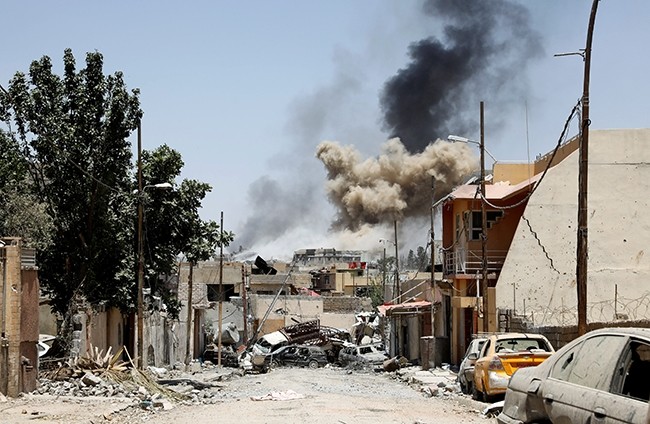 The UN said Friday that Daesh terrorist group may be holding more than 100,000 Iraqi civilians as human shields in the Old City of Mosul.

Iraqi forces are fighting to retake Mosul from Daesh, after the terrorist group overran the city in 2014, imposing its brutal rule on its inhabitants.

The UN refugee agency's representative in Iraq Bruno Geddo said Daesh had been capturing civilians in battles outside of Mosul and had been forcing them into the Old City, one of the last parts of the city in their grip.

"More than 100,000 civilians may still be held in the Old City," Geddo told reporters in Geneva.

"We know that [Daesh] moved them with them as they left... locations where the fighting was going on," he said.

"These civilians are basically held as human shields in the Old City."

With virtually no food, water or electricity left in the area, the civilians are "living in an increasingly worsening situation of penury and panic," he said.

"They are surrounded by fighting on every side."

Snipers meanwhile try to kill anyone trying to leave the area under terrorist control, he said, adding that the few who manage to escape are "deeply traumatised."

Since the battle to retake Mosul began nine months ago, an estimated 862,000 people have been displaced from the city, although 195,000 have since returned, mainly to the liberated east of the city.

That means 667,000 people remain displaced, nearly all of them from western Mosul, and are living in 13 camps set up by UNHCR or with host families.

Geddo said the UN agency so far had provided assistance to more than 500,000 of the displaced people, and was also attempting to help those returning to Mosul, often to live in bombed-out buildings.

"Many of these people are returning ... to situations of penury," he warned.