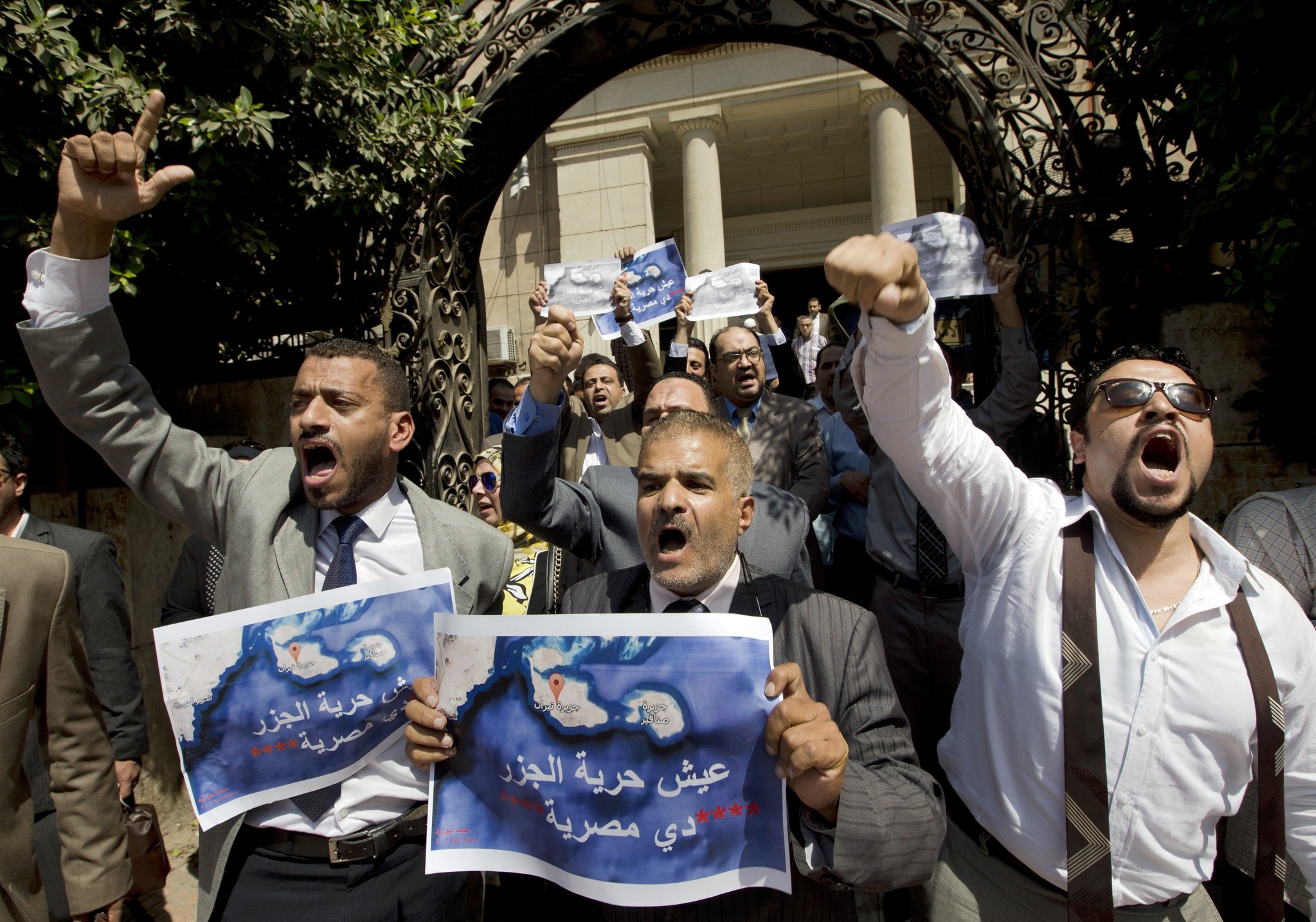 Dozens of lawyers shout slogans during a protest against the accord to hand over control of two strategic Red Sea islands, Tiran and Sanafir, to Saudi Arabia in front of the lawyers syndicate in Cairo. (AP Photo)
by French Press Agency - AFP Jun 24, 2017 12:00 am

Egyptian President Abdel Fattah al-Sisi ratified a treaty that hands over two Red Sea islands to Saudi Arabia in a deal that had sparked protests and a police crackdown, the cabinet said Saturday.

Sisi ratified the maritime border treaty days after parliament approved the deal, which has been the subject of a confusing legal battle with one court annulling the treaty and another upholding it.

The treaty, first announced in April 2016, had fuelled rare protests and police have arrested dozens of activists over the past week after calls for more demonstrations.

It had also been challenged in courts, but the country's highest tribunal had suspended the contradictory rulings this week until a final decision determined which court has jurisdiction.

Parliament's vote on June 14 came after days of heated debate, with opponents even interrupting one committee session with chanting.

The accord had sparked rare protests in Egypt, with Sisi accused of having traded the islands of Tiran and Sanafir for Saudi largesse.

The government has said the islands were Saudi to begin with, but were leased to Egypt in the 1950s.

Opponents of the agreement insist that Tiran and Sanafir are Egyptian.

Sisi on Tuesday had again insisted on the need to return the islands to their "owners".

"Nations are governed by constitutions and laws and legitimate rights, not whims or emotions," the presidency had quoted him as saying.

Lying at the mouth of the Gulf of Aqaba, the islands can be used to control access to the Israeli port of Eilat.

They were captured by Israel in the 1967 Middle East war before being returned to Egypt under the 1979 Camp David Accords.

Generations of Egyptians had grown up learning in school that the two islands belonged to their country and that soldiers had died defending them during wars with Israel.

Sisi went ahead with the deal even though it threatened to dent his popularity, and at a time that the government, grappling with austerity reforms that have fuelled inflation, is wary of protests.

Police arrested dozens of activists since parliament passed the law.

Activists had called for protests last Friday, but few materialised.

Protests without a court permit are illegal in Egypt and may lead to prison terms.