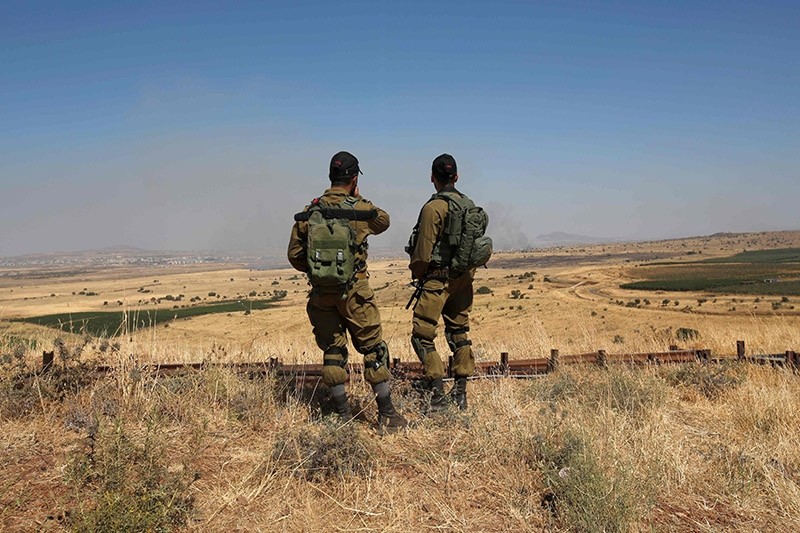 Israeli soldiers patrol near the border with Syria after projectiles fired from the war-torn country hit the Israeli occupied Golan Heights on June 24, 2017. (AFP Photo)
by Compiled from Wire Services Jun 24, 2017 12:00 am

Israeli jets on Saturday hit several targets in Syria allegedly in response to rocket attacks from the war-torn country, the military said in a written statement.

It said that "more than 10" rockets had been fired from Syria earlier.

"An official protest has been sent to the United Nations Peacekeeping Forces as the Israeli sovereignty was violated in an unacceptable way," the army said.

The Israeli Air Force also targeted two tanks of the Assad regime in the northern part of the Golan, the army said, adding the projectiles did not cause any casualties.

Israel seized 1,200 square kilometers (460 square miles) of the Golan from Syria in the Six-Day War of 1967 and later annexed it in a move never recognized by the international community.

Around 510 square kilometers of the Golan are under Syrian control.

Since the outbreak of Syria's civil war in 2011, the Israeli army has occasionally struck targets inside Syria, especially after shells fired from Syrian territory have fallen inside the Golan Heights, either intentionally or in error.

In April, Israel shot down what it identified only as "a target" over the Golan, hours after Syria accused it of hitting a military position near Damascus airport.

Israel did not confirm or deny the reported Damascus attack.