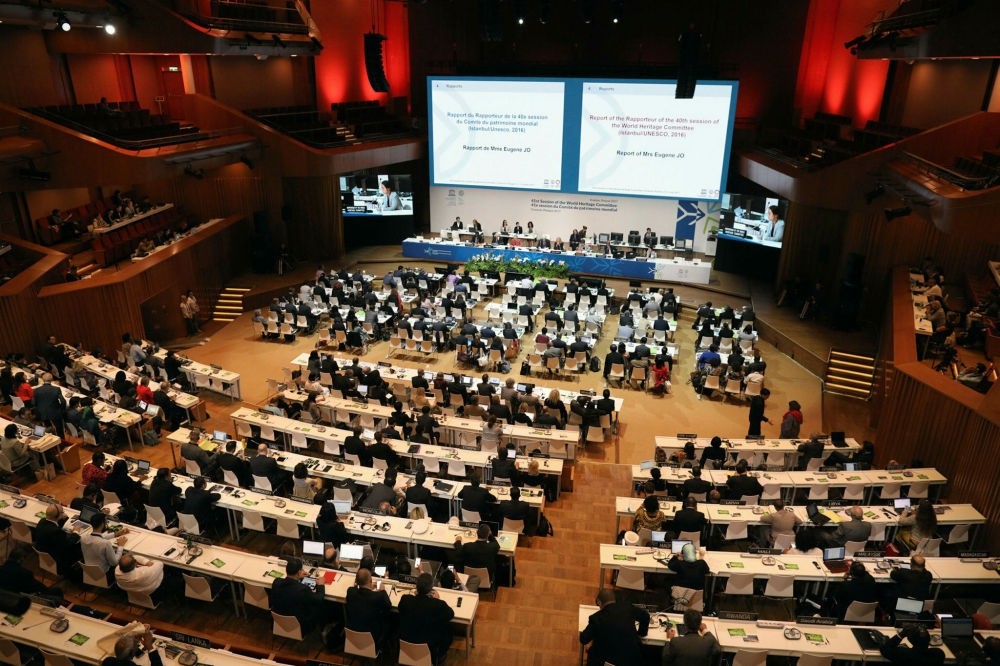 Attendees sit during the opening of the 41st session of the United Nations Educational, Scientific and Cultural Organization (UNESCO) World Heritage Committee at the ICE Krakow Congress Centre in Krakow, Poland, July 3.
by Daily Sabah with Wires Jul 06, 2017 12:00 am

In a landmark meeting of the World Heritage Committee, UNESCO denounced Israel's ‘illegal' practices in East Jerusalem al-Quds and describing the country as an ‘occupying power'

Participants in a UNESCO World Heritage Committee session in Krakow, Poland, called on Israeli authorities to stop excavations and other work in the Old City, saying they are illegal.

UNESCO adopted the resolution with 10 member states voting in favor, three voting against and eight abstaining. Tuesday's vote was the latest in a string of spats between Israel and the U.N. cultural agency.

The resolution slammed, "The failure of the Israeli occupying authorities to cease the persistent excavations, tunneling, works, projects and other illegal practices in east Jerusalem [al-Quds], particularly in and around the Old City of Jerusalem, which are illegal under international law."

Israel has protested a UNESCO vote that called it an "occupying power" in Jerusalem's Old City. Israeli Ambassador to the U.N. Danny Danon condemned the vote's wording as "disgraceful."

"No faux 'heritage committee' can sever the bonds between our people and Jerusalem," Danon said in a statement made available to The Associated Press on Wednesday.

In October 2016, the U.N. cultural agency adopted a resolution on East Jerusalem that caused Israel to suspend its cooperation with the agency. The resolution asserted that Jerusalem is holy to the three monotheistic religions: Judaism, Islam and Christianity.

However, it denies the Jewish connection to the Al-Aqsa Mosque complex, which Jews refer to as the "Temple Mount." It also strongly condemned what it described as "escalating Israeli aggression and illegal measures" against the organization and its personnel and violations of Muslims' rights to worship at the site.

Palestine Deputy Ambassador to UNESCO Mounir Anastas told reporters the resolution "reminds Israel that they are the occupying power in east Jerusalem, and it asks them to stop all their violations," including archaeological excavations around religious sites.

It was the second time last year that UNESCO was the arena of tensions between Israel and Arab countries. In April 2016, the organization passed a resolution condemning "Israeli aggressions and illegal measures against the freedom of worship and Muslims' access to the Al-Aqsa Mosque."

After the 1967 war, Israel annexed east Jerusalem and deems the entire city its "indivisible and eternal capital," a status not recognized internationally. Israel pulled out of Gaza in 2005, and it is now ruled by Hamas. The international community regards all Israeli settlements in occupied Palestinian territories to be illegal and a major obstacle to Middle East peace. The area, captured by Israel in 1967, is not sovereign Israeli territory, and Palestinians there are not Israeli citizens and do not have the right to vote. Palestinians accuse Israel of waging an aggressive campaign to "Judaize" the historic city with the aim of effacing its Arab and Islamic identity and driving out its Palestinian inhabitants.