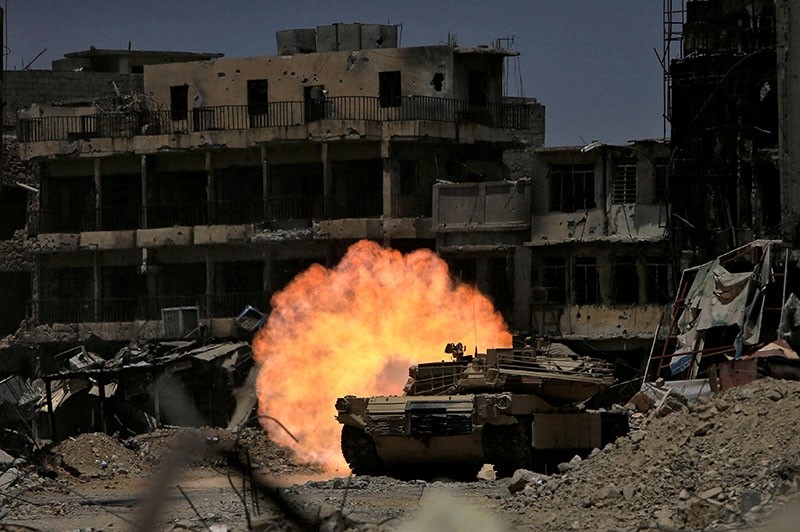 A Daesh group counterattack Friday along the northern edge of Mosul's Old City neighborhood has pushed Iraqi Army forces back some 75 meters (82 yards) and is threatening recent gains in other Old City fronts, an Iraqi military officer said.

The officer said the attack was launched just after noon Friday and estimated it was carried out by 50 to 100 Daesh fighters. A doctor at a medic station said he received more than a dozen wounded Iraqi soldiers.

Both men spoke on condition of anonymity in line with regulations.

Iraqi security forces have retaken almost all of Mosul — Iraq's second largest city — from Daesh militants who overran it in 2014.

In late June, Daesh counterattacks on the western edge of Mosul — neighborhoods retaken months earlier — stalled the push by Iraqi forces to go deeper into the Old City as they forced a reallocation of Iraqi ground forces, coalition surveillance and air support.

Unlike the Friday attack, the late June counterattack was launched from outside Mosul, most likely from Tal Afar, a Daesh-held town some 60 kilometers (37 miles) west of Mosul.

The counterattacks underscore the terrorist group's resilience in Iraq, despite significant territorial losses and months of heavy fighting with Iraqi forces backed by U.S. air power.

The pockets of Daesh-held Mosul now measure less than a square kilometer.

Further south, Daesh launched an assault on Imam Gharbi village some 70 kilometers (44 miles) south of Mosul on the western bank of the Tigris River, on Wednesday evening from a pocket of territory still under their control on the eastern bank, killing several people including two journalists.

The attack appeared to be the sort of diversionary, guerrilla-style strike tactics Daesh is expected to focus on as U.S.-backed Iraqi forces regain control over cities IS captured in a shock 2014 offensive.

Two Iraqi journalists were reported killed and two others wounded as they covered the security forces' counter-attack to take back the village on Friday. An unknown number of civilians and military were also killed or wounded in the clashes.

The Iraqi military has forecast final victory this week in what used to be the de facto capital of Daesh's "caliphate" in Iraq, after a grinding eight-month, U.S.-backed offensive to wrest back the city, whose pre-war population was 2 million.

But security forces faced ferocious resistance from roughly several hundred militants hunkered down among thousands of civilians in the maze of alleyways in Mosul's Old City.

Mosul was by far the largest city seized by Daesh in its offensive three years ago where the ultra-hardline group declared its "caliphate" over adjoining parts of Iraq and Syria.

Stripped of Mosul, Daesh's dominion in Iraq will be reduced to mainly rural, desert areas west and south of the city where tens of thousands of people live, and the militants are expected to keep up asymmetric attacks on selected targets across Iraq.

Adhel Abu Ragheef, a Baghdad-based expert on terror groups, said Daesh was likely to carry out "more of these raid-type attacks on security forces to try to divert them away from the main battle", now in Mosul and then in other areas west of Mosul including near the Syrian border still Daesh control.

Prime Minister Haider al-Abadi declared the end of Daesh's "state of falsehood" a week ago, after security forces took Mosul's mediaeval Grand al-Nuri mosque - although only after retreating militants blew it up.

Months of grinding urban warfare in Mosul have displaced 900,000 people, about half the city's pre-war population, and killed thousands, according to aid organizations.

The United Nations predicts it will cost more than $1 billion to repair basic infrastructure in Mosul. Iraq's regional Kurdish leader said on Thursday in a Reuters interview that the Baghdad central government had failed to prepare a post-battle political, security and governance plan.

The offensive has damaged thousands of structures in Mosul's Old City and destroyed nearly 500 buildings, satellite imagery released by the United Nations on Thursday showed.

In some of the worst affected areas, almost no buildings appear to have escaped damage, and Mosul's dense construction means the extent of the devastation might be underestimated, U.N. officials said.

Humanitarian groups have repeatedly suspended operations in and around Mosul due to security concerns since the fight to retake the city from IS began last October.

In April, the United Nations suspended operations in the same area due to security threats along the road south of Mosul's western half.

In February the U.N. suspended operations in eastern Mosul weeks after the area was declared fully liberated as IS attacks continued to inflict heavy civilian casualties.

In both instances the U.N. resumed operations within a matter of days.
Last Update: Jul 07, 2017 3:41 pm
RELATED TOPICS