Final victory against Daesh in Mosul ‘imminent,’ US general says 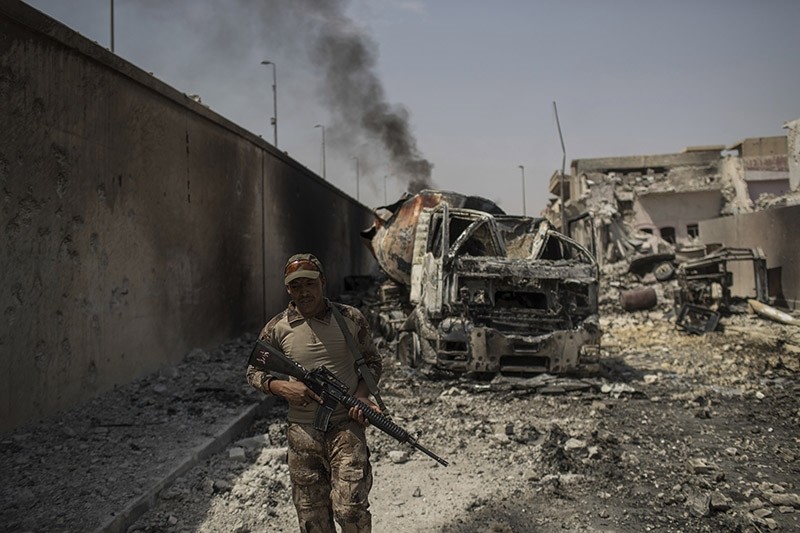 An Iraqi army soldier walks on a damaged street as Iraqi forces continue their advance against Daesh terrorists in the Old City of Mosul, Iraq, Saturday, July 8, 2017. (AP Photo)
by Jul 08, 2017 12:00 am

Iraqi authorities will imminently announce a final victory in the battle to recapture Mosul from the Daesh terror group, a U.S. general said Saturday.

"I don't want to speculate if it's today or tomorrow but I think it's going to be very soon," he added.

The terrorists that remain in Mosul are fighting to the death in a tiny area of just two blocks of the Old City next to the Tigris River, Sofge said, and those that remain are "desperate."

Some are trying to blend in with fleeing civilians by shaving their beards and changing their clothes, others are playing dead then detonating explosive vests as Iraqi security forces come close. Women Daesh terrorists have blown themselves up amid throngs of displaced civilians.

"They are doing as much damage as they can during these final moves," Sofge said.

The battle for Mosul first began on October 16, 2016 and the fight has seemed to grow exponentially tougher as U.S.-backed Iraqi security forces closed in on the center of the city.

Slowing the advance toward the final holdouts, Daesh have placed countless booby traps and bombs in practically every structure they occupied.

A final victory in Mosul would mark an epic milestone for the Iraqi security forces, who had crumbled in the face of an Daesh onslaught across Iraq in 2014.

"They deserve every bit of a celebration and pride and sense of accomplishment that a military force can feel," Sofge said, offering a "congratulations in advance in a great battle."

"This fight in Mosul is not like anything modern militaries have done in our life time. You have to go back to World War II to find anything that's even close."