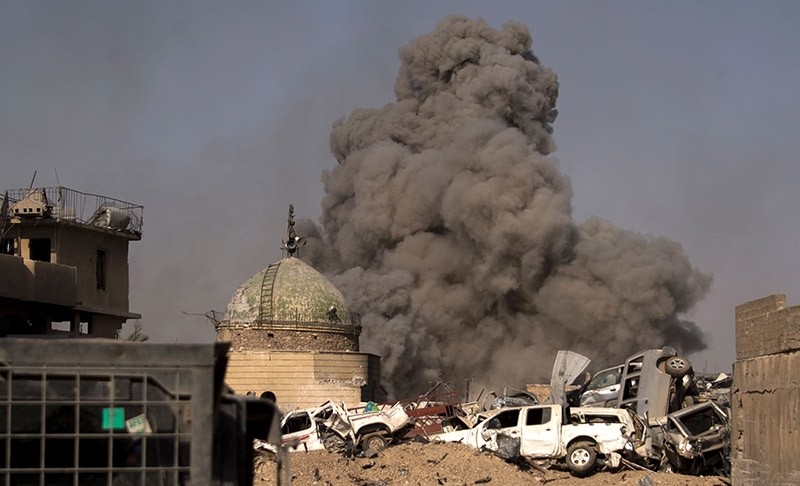 A picture taken on July 10, 2017, shows smoke plumes billowing in the Old City of Mosul during the offensive by the Iraqi force to retake the embattled city from Daesh. (AFP Photo)
by Compiled from Wire Services Jul 11, 2017 12:00 am

Amnesty International said on Tuesday it had identified a pattern of attacks by Iraqi forces and the U.S.-led military coalition backing them in the battle for Mosul that violated international humanitarian law and may amount to war crimes.

The rights group said in a report that the Daesh terror group had flagrantly violated that same law by deliberately putting civilians in harm's way to shield their fighters and impede the advance of Iraqi and coalition forces.

"The horrors that the people of Mosul have witnessed and the disregard for human life by all parties to this conflict must not go unpunished," said Lynn Maalouf, director of Middle East research at Amnesty International.

"An independent commission must immediately be established, tasked with ensuring that any instances where there is credible evidence that violations of international law took place, effective investigations are carried out, and the findings made public," she added in a statement.

Iraqi Prime Minister Haider al-Abadi declared victory in Mosul on Monday, three years after Daesh seized the city and made it their stronghold.

But the victory has left thousands dead and wounded, and the city has been devastated by the fighting since Iraqi forces launched their offensive in October to retake Mosul.

Much of Mosul has been destroyed in grinding street-to-street fighting, thousands of civilians have been killed and nearly a million people fled their homes, according to the United Nations.

"Even in attacks that seem to have struck their intended military target, the use of unsuitable weapons or failure to take other necessary precautions resulted in needless loss of civilian lives and in some cases appears to have constituted disproportionate attacks," the report said.

Neither the Iraqi defense ministry nor coalition officials were immediately available to comment on the Amnesty report.

Amnesty also slammed Daesh for a host of crimes that have been documented previously.

The terrorists rounded up residents in contested villages and neighborhoods and forced them to move into conflict zones in west Mosul for use as human shields, it said. As clashes neared, they trapped the civilians inside houses without access to food or medical care, it said.

The terrorists also fought and hid among the population.

Daesh summarily killed hundreds, if not thousands, of men, women and children who attempted to flee and hanged their bodies in public areas, according to the report.

Amnesty acknowledged the challenges of protecting civilians given the terrorists' tactics, but still blamed Iraqi authorities and the coalition for failing to take feasible precautions to protect civilians from air strikes. It said leaflet drops warning of attacks had been virtually useless because Daesh heavily restricted civilian movement.

Neither the government nor the coalition keep track of civilian deaths. Amnesty said the toll just in west Mosul from attacks launched by pro-government forces was very likely higher than the 3,706 estimated by monitoring group Airwars.

"The true death toll of the west Mosul battle may never be known," it said.

In addition to calling for an independent commission, Amnesty published a series of recommendations for the Iraqi authorities including establishing a compensation program for civilians.