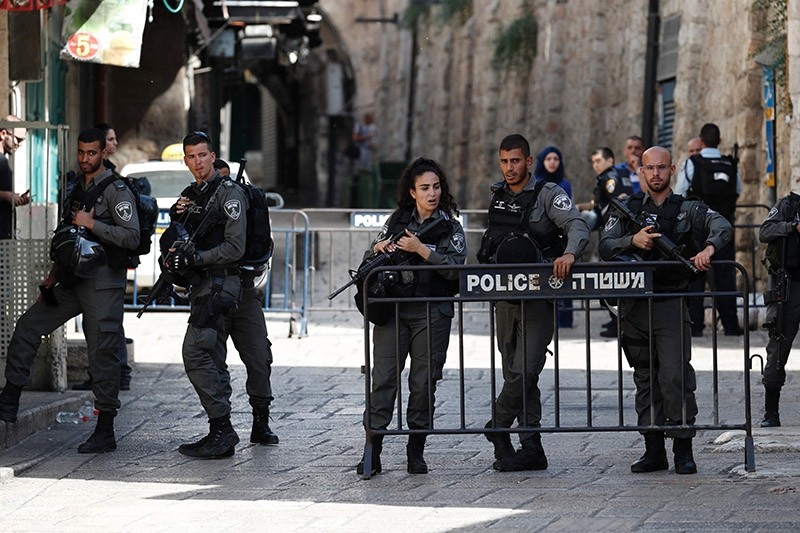 Israeli security forces stand guard at one of the entrances to Al Aqsa mosque compound in the Jerusalem's Old City on July 14, 2017. (AFP Photo)
by Compiled from Wire Services Jul 16, 2017 12:00 am

As Israel reopened Al-Aqsa mosque after it closed following a deadly shootout, new security measures including metal detectors and cameras have triggered a dispute with Palestinians

After preventing thousands of Muslims from worshiping there, and tourists from visiting the UNESCO World Heritage Site, Israel allowed Jerusalem's flashpoint Al-Aqsa mosque compound to be reopened Sunday after a two-day closure. It was among the most serious incidents in recent years in Jerusalem and it heightened Israeli-Palestinian tensions.

Israeli forces conducted a security sweep yesterday morning and began installing the detectors. Given the large number of worshipers that enter the site on a daily basis, the new measures could slow movement and spark tensions.

In statements ahead of his departure to Paris late Saturday, Prime Minister Benjamin Netanyahu said he had ordered metal detectors installed at the gates as part of new security measures to be introduced at the holy site, also revered by Jews as the Temple Mount.

"We will also install security cameras on poles outside the Temple Mount but which give almost complete control over what goes on there. I decided that as of tomorrow, in the framework of our policy of maintaining the status-quo, we will gradually open the Temple Mount, but with increased security measures," he said.

Israel took the highly unusual decision to close the Al-Aqsa mosque compound for Friday prayers, leading to anger from Muslims and Jordan, the holy site's custodian. It remained closed on Saturday, while parts of Jerusalem's Old City were also under lockdown.

The mosque was closed and Friday prayers canceled for the first time since Israel occupied east Jerusalem in 1967 after a gunfight inside the compound on Friday morning killed two Israeli police officers and the three alleged Palestinian attackers.

The Jerusalem shrine has been the scene of repeated confrontations, including during the current wave of violence. In September 2000, then-Israeli opposition leader Ariel Sharon made a provocative visit to the site, sparking Palestinian protests that quickly escalated into armed clashes between Palestinians and Israeli soldiers.

The incident was one of the triggers of an armed Palestinian uprising and an Israeli military crackdown. The violence claimed several thousand victims, most of them Palestinians, and only began to ebb in 2005.

The attack triggered a rare phone conversation between Netanyahu and Palestinian President Mahmoud Abbas, who condemned the attack and called for the site to be reopened. Jordan, a custodian of the sacred compound, also called for its immediate reopening. Gaza's Hamas rulers called the act a "religious war."

Temple Mount is central to the Israeli-Palestinian conflict, with Palestinians fearing Israel may one day seek to assert further control over it. It is located in east Jerusalem, occupied by Israel in 1967 and later annexed in a move never recognized by the international community. It is considered the third holiest site in Islam and the most sacred for Jews. Jews are allowed to visit but not pray there to avoid provoking tensions.