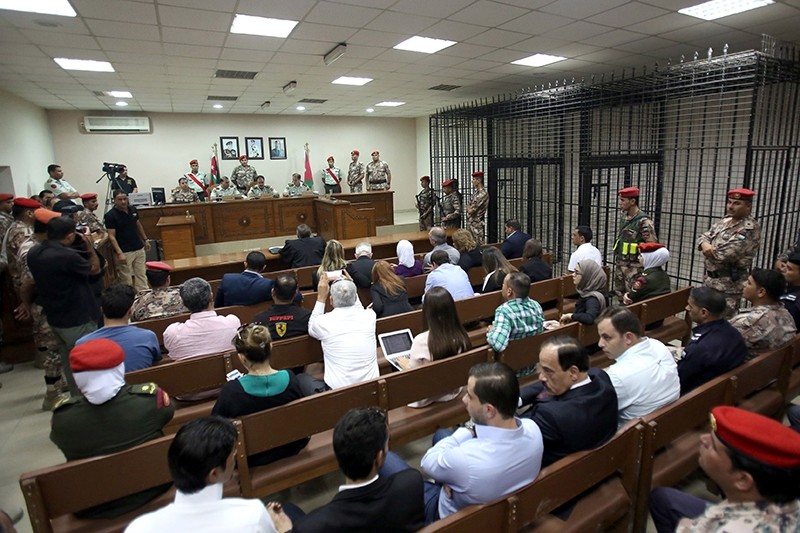 A military court in Amman sentenced Monday a Jordanian soldier to life imprisonment over the killing of three American military trainers outside an army base last year.

Maarik al-Tawaiha, 39, was found guilty of shooting the trainers as they waited to enter the King Faisal base at Al-Jafr in southern Jordan on Nov. 4.

The charge sheet did not indicate that he had any ties to militant groups.

U.S. embassy staff and relatives of the victims were present at Monday's hearing, which took place under heavy security.

"We are reassured to see that the perpetrator has been brought to justice. We appreciate the Jordanian court's access that was provided to us and to the families of the victims, as well as the expediency and seriousness of the court proceedings," he said.

The court sentenced Tawaiha to "hard labor for life," a term that usually lasts 20 years but could stretch to a full lifetime, a judicial official told an AFP correspondent at the courthouse.

It also demoted him from sergeant to second private and threw him out of military service.

The prosecution in June accused him of "voluntary manslaughter" over the deaths of Matthew Lewellen, Kevin McEnroe and James Moriarty.

He was also charged with "insulting the dignity and reputation of the armed forces and violating military orders."

Tawaiha had been in custody since November but denied the charges.

The court had heard evidence from base guards and forensic experts.

In its ruling, the court said the incident had happened when vehicles carrying the trainers approached the gate of the base.

At that moment, there was "a low sound of gunfire from a distant and unknown source."

Tawaiha, who was in a guard post at the gate, told the court he had opened fire on the cars carrying the American trainers because he suspected an attack on the base.

The court said he "fired a full magazine of ammunition... intending to kill them after it was clear to him who they were and that they were American personnel."

It said he had disobeyed orders by failing to follow rules of engagement before opening fire.

The shots killed the three Americans and wounded a Jordanian soldier.

The Al-Jafr shootings came almost a year after a Jordanian policeman gunned down two U.S. instructors, a South African and two Jordanians at a police training center east of Amman, before being shot.

The King Faisal air base hosts trainers of various nationalities including Americans.

Jordan, which hosts some 2,200 American military personnel, is a key American ally and a member of the U.S.-led coalition fighting the Daesh terrorist group in neighboring Syria and Iraq.

U.S. forces have trained a small group of vetted Syrian opposition in Jordan, and American instructors have also trained Palestinian security forces inside the kingdom.

Tens of thousands of Iraqi, Yemeni and Libyan forces have likewise received training in Jordan.

In 2015, the United States said it would increase overall U.S. assistance to Jordan, which is hosting hundreds of thousands of refugees from the war in Syria, from $660 million to $1 billion annually for the period to 2017.