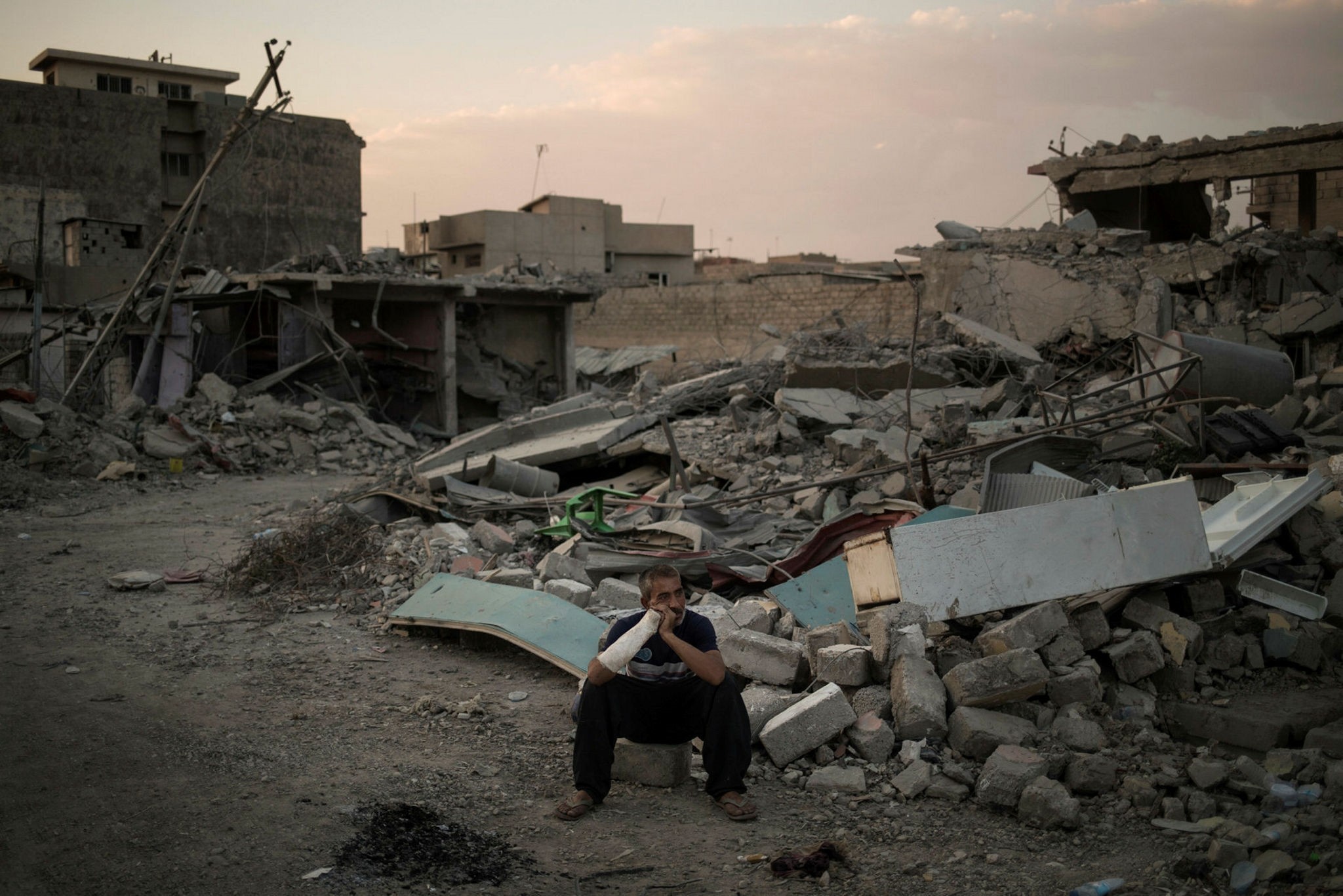 A man who was injured when his house was hit by an explosion sits on his damaged street on the west side of Mosul, July 13.
by Yusuf Selman İnanç Jul 19, 2017 12:00 am

After Daesh was driven out of Mosul, residents say the Iraqi troops and Iranian-backed Shiite militias have not provided security and instead pose a threat to civilians due to sectarian hatred

Dramatic photos from Mosul continue to go viral on social media and on news sites as the centuries-old city stands in ruins. Historical sites, mosques, churches, shrines and modern facilities have either been destroyed or heavily damaged. Half of the population has already left the city while those remaining suffer from lack of food, water, electricity and, most importantly, security. Reports say Iraqi troops and Shiite militias treat civilians as if they are Daesh members. The city, saved from Daesh extremists, has fallen into the hands of Shiite forces. Previously, several rights groups have criticized the Iraqi government for remaining silent on atrocities committed by militants.

Although it has been claimed that only Iraqi troops were involved in the liberation of the city, many Iranian-backed militias have also entered Mosul. Adorning the city with their own banners, militants chant slogans, telling Sunni residents that Mosul is no longer theirs.

Hafiza and Amir, who fled to Irbil first before coming to Turkey after Daesh captured Mosul in 2014, said they thought it got worse when Daesh came. Since Amir was paid by the state, he and his family had to flee to avoid being killed by Daesh. They refused to provide their surnames or any photos due to security reasons in case of their possible return to Mosul. At the end of a long and difficult journey, they reached Irbil, where they said they were not warmly welcomed and had to flee to Turkey. Amir said the three years were worse than a nightmare for them and also for their relatives who stayed in Mosul. "They destroyed everything. They captured homes, wealth and applied very strict rules. Shiites claim that they were Sunnis and treated us fairly. But this is not true. In their views, we were not true Muslims."

His wife Amira added: "Now, the Shiites say we are not true Muslims. We are oppressed by each side." When asked if they wanted to go back to Mosul, they both said yes, but asserted that there is no Mosul to return to. "It was under Daesh occupation and now it is under Shiite occupation. Also, they are very hostile to us." Rejecting claims that Sunnis allied with Daesh, Amir said: "They had no choice but to obey. Those who did not obey were either killed or left."

Although it is not possible to verify the claims, several reports say there has been a wide purge in the city. With passion for revenge, Iraqi troops and the militias supposedly kill people, claiming that they are Daesh militants. It is not easy to distinguish militants from civilians since some of them have started disguising themselves as civilians. The Independent's Patrick Cockburn wrote on the weekend: "'The people of Mosul will receive their salaries, while the people of Basra will receive the bodies of their martyrs,' runs a bitter comment on Iraqi social media," in reference to the current social tension and lack of trust. "Sectarian and ethnic cleansing by state authorities or militia groups in Iraq may have long-term political objectives but they also fulfill popular wishes. … There are hundreds of social media accounts evidently from Iraqi Shias, accusing the people of Mosul of supporting [Daesh]," he added.

On atrocities, the Guardian reported: "Iraqi security forces' reputation suffered a blow last week when about a dozen videos showing troops' brutality were published on social media. One shows a soldier stabbing a man in the neck and face as he shrieks in pain and begs for his life. 'This is for the martyrs,' says the soldier as the man lies in a pool of blood. … In the past nine months, Iraqi security forces have been mired in a number of incidents contrary to the rules of conflict but Baghdad has stayed silent."

Amir and Hafiza said Mosul residents have always suffered under Baghdad's sectarian and discriminatory policies. "Nothing will be good as long as we cannot learn how to live together. Apparently, it seems very difficult," Amir said.

The devastating battle left thousands of people dead, more than a million displaced and a city ruined with deepened sectarian division. With similar concerns Hassan Hassan on Saturday wrote in the Guardian: "[T]he fear is that the same issues of sectarian division and government corruption and incompetence will prevail – the same circumstances that allowed the rise of [Daesh] in the first place."